No. 8 Xavier bounces back with 95-82 win over Georgetown

Adam Kunkel scored 14 points to help the Musketeers (16-4, 8-1 Big East) bounce back from a 73-72 loss at DePaul on Wednesday, which snapped an 11-game winning streak.

“It was a step in the right direction,” Freemantle said. “Obviously, a win is better than a loss. I don’t think anyone on our team would say they’re satisfied with the way we played today. But coming off a loss, it feels good to win.”

With double-digit scorer Brandon Murray injured, the Hoyas had to rely on Spears to carry the scoring load.

“Brandon wasn’t there, so the bulk of the shots went to him,” said Hoyas coach Patrick Ewing. “He took the challenge. He forced it a little bit at times, but we needed him to score to be in the game.”

Georgetown went on an 11-0 run in the first half to tie the score 24-24, but the Musketeers responded with a 9-0 run to regain control.

Spears scored 17 points in the first half to keep the Hoyas close. Xavier led 45-39 at halftime.

“We didn’t play well today,” said Xavier coach Sean Miller. “Credit Georgetown. They were undermanned. Primo Spears was fantastic. We’re thrilled to win. There are no easy nights in the Big East.”

Freemantle’s 3-pointer gave the Musketeers their largest lead of the game, 76-64, with 9:11 left.

Xavier, which averages 83.5 points, scored 90 or more points for the sixth time this season.

“Not just this game, but most games, our defense is letting us down right now,” Ewing said. “We have to be able to get stops when we need to get stops.”

Jones, coming off a rare poor shooting night at DePaul where he went 3-for-14 from the floor and 0-for-4 from three-point range, went 8 of 11 from the floor and 3 of 5 from long range on Saturday. “As far as confidence-wise, every player wants to bounce back after a bad game,” Jones said. “Definitely felt good to see some shots go through today.”

Xavier has allowed 80 or more points seven times this season. Miller is concerned about improvement in that area heading into a difficult stretch in the Big East schedule. “Our defense is really bad,” Miller said. “We don’t have an ability to guard individual players. I’ve never seen anything like it. Our remaining schedule isn’t set up for that mentality. The days of us outscoring teams has ended.” The Musketeers have a two-game road trip upcoming at UConn and Creighton.

Georgetown: The Hoyas continues to struggle under legendary former player Ewing, who is 73-99 since becoming head coach in 2017. Ewing’s contract runs through this season. Georgetown’s last regular-season Big East win came on March 2, 2021, at home against Xavier. “I take my hat off to these guys, they continue to fight,” Ewing said. “They have not given up. They have not quit.”

Xavier: The Musketeers lead the nation in assists per game at 20.6, but had only 13 in the loss at DePaul, its second-lowest total of the season behind nine in a loss to Duke on Nov. 25. On Saturday, they dished out a season-high 31 assists, the most by a Big East team this season. They had three players with seven assists. “It just shows how unselfish everybody is,” Freemantle said. “There’s no agenda. It’s just, find the first open man and keep playing.”

Xavier: Plays at No. 15 UConn on Wednesday. 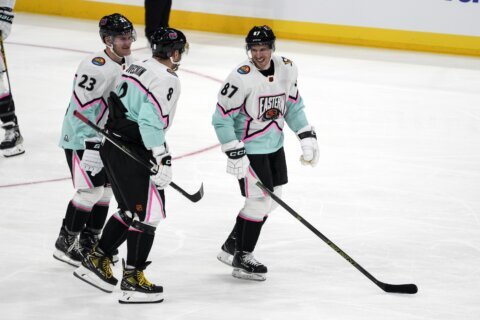 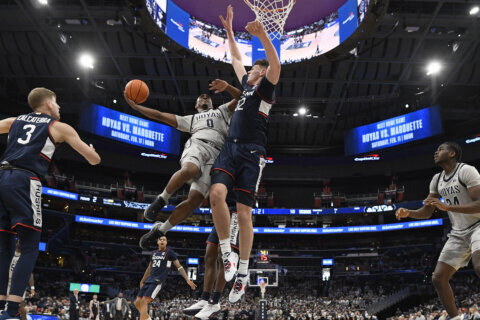 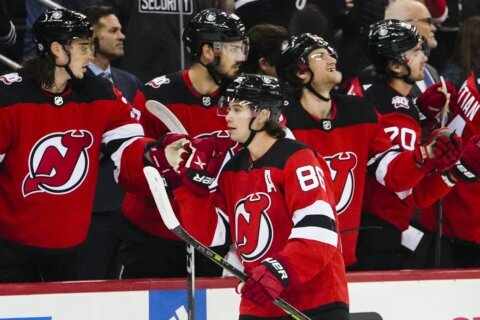