Rookie running back Brian Robinson Jr. is back practicing with the Washington Commanders for the first time since being shot in an attempted robbery.
Listen now to WTOP News WTOP.com | Alexa | Google Home | WTOP App | 103.5 FM
(1/17) 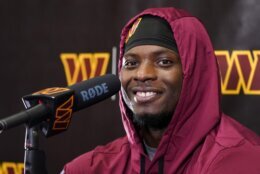 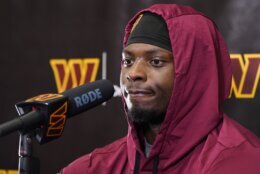 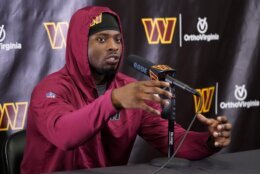 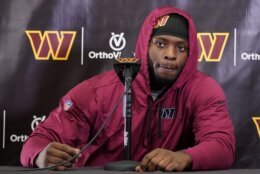 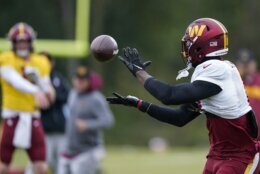 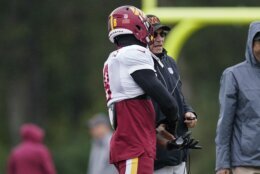 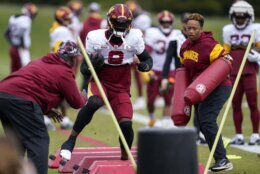 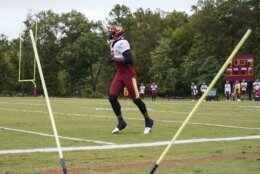 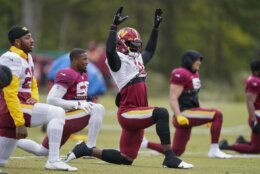 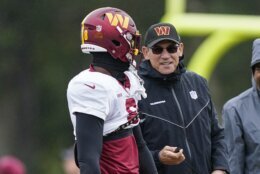 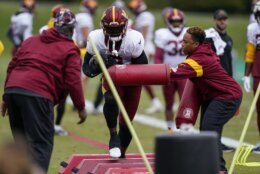 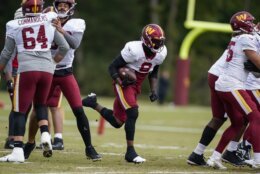 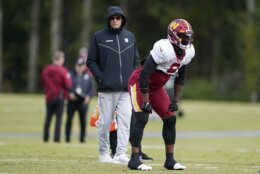 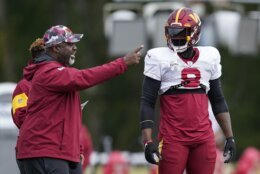 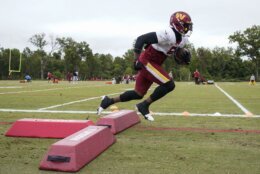 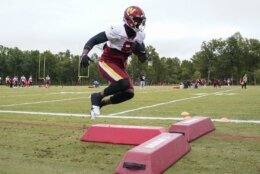 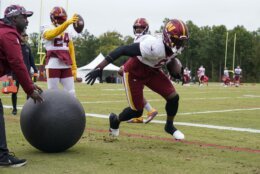 ASHBURN, Va. (AP) — The moment doctors told Brian Robinson Jr. he would be able to play football again after being shot in an attempted robbery, his thoughts shifted to what it would take to get back on the field. Then he followed through on that path.

Robinson recovered so quickly from two gun shot wounds to his right leg that he practiced with the Washington Commanders on Wednesday, just over five weeks since the shooting.

There’s a chance the rookie running back makes his NFL debut as soon as Sunday against Tennessee.

“It was beautiful,” Robinson said of his first day back. “Just getting back on the field, having fun, being around my coaches and team again, it was just a beautiful day for me.”

Neither he nor coach Ron Rivera was prepared to commit to the Alabama product facing the Titans. The game marks six weeks to the day Robinson was shot.

Rivera said Robinson looked solid in practice and was relieved not to see any hesitation. The Commanders have lost three in a row to fall to 1-3, but they’ll also attempt not to rush Robinson, especially given the upcoming short week with a game at Chicago next Thursday night.

“It was good to have him out there,” Rivera said. “He’s got a little bit ways to go. Conditioning will be a question, that’s for sure.”

Robinson surprised himself by going from a hospital bed to a full team practice in 38 days. Teammates marveled at how short the turnaround was.

“He’s half-Wolverine or something,” fellow running back Jonathan Williams said. “But nothing really surprises me about him.”

Robinson was not able to address details of the incident because there’s an ongoing investigation, a team spokesperson said. D.C. Police said Robinson was shot in the right leg by two suspects in Northeast Washington on Aug. 28 and taken to a local hospital.

The bullets missed all the ligaments and bones in Robinson’s right knee. Even with that, it took until he did a drill in practice to test the leg before he felt right.

Robinson wanted to see what he could physically do, which amounted to roughly eight to 10 snaps, according to Rivera. Then the coaching staff had to rein him in.

“He wanted to do more — we had to slow him down a little bit,” Rivera said. “Because he did so much work, we’ll see how he is tomorrow. But I think right now he’s in a good place and, for us as a football team, it’s good to see him back out there.”

Robinson, a third-round pick, impressed so much in training camp and the preseason he was expected to be Washington’s starting running back. If he’s able to play Sunday, he gives the team another option with Antonio Gibson and third down back J.D. McKissic.

“We’ll have to monitor where Robinson is and there’s a good player,” Titans coach Mike Vrabel said. “We’ve studied him and he’s got good size. And so it’ll be important for us to know the back in the game and how they’re trying to use them.”

The Commanders have 21 days to activate Robinson off the non-football injury list. The fact that clock is starting so soon is an inspiration to teammates who doubt they’d be able to bounce back like this.

“(For me) it would be hard to come back in like a month after being shot — twice,” safety Bobby McCain said. “I can just imagine the level of determination he has. You’ve got to really love this to want to do this after being shot.”

NOTES: Right tackle Sam Cosmi underwent hand surgery earlier in the week and did not practice Wednesday. Cosmi’s injury is the latest blow to a banged-up offensive line already on its third starting center. Cornelius Lucas would start in Cosmi’s place. … WR Jahan Dotson also did not practice while dealing with a hamstring injury Rivera expects to sideline the rookie for a game or two. 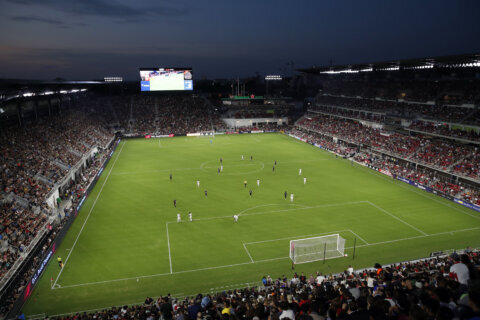