FLORHAM PARK, N.J. (AP) — The New York Jets are already without their starting quarterback. They might be without their…
Listen now to WTOP News WTOP.com | Alexa | Google Home | WTOP App | 103.5 FM

FLORHAM PARK, N.J. (AP) — The New York Jets are already without their starting quarterback. They might be without their left tackle, too.

Duane Brown didn’t practice for a second straight day Thursday while dealing with a shoulder issue, putting his availability for the season opener Sunday against Baltimore in serious doubt.

Coach Robert Saleh said shortly before practice that Brown wasn’t at the facility because he was having his shoulder evaluated. He didn’t have any other immediate details.

The injury concerns came a day after Saleh announced quarterback Zach Wilson would not return until the Jets’ game at Pittsburgh on Oct. 2 at the earliest while recovering from a bone bruise and torn meniscus in his right knee. Joe Flacco is starting Sunday in Wilson’s place.

The 37-year-old Brown was signed to a two-year, $22 million contract last month after right tackle Mekhi Becton was lost for the season because of a knee injury. George Fant, who was slated to start at left tackle, slid over to the right side after Brown was signed. Brown has played left tackle all 14 of his previous NFL seasons.

The Jets’ group of five starting offensive linemen played only about 20 snaps together in the preseason because of injuries and Brown arriving late in camp.

“Am I concerned about the continuity? No,” offensive coordinator Mike LaFleur said. “Is it the most ideal situation? No. You want them to be playing from the first snap of OTAs to training camp. That’s not the cards we were dealt and that is what it is.”

But if Brown can’t go Sunday, the Jets will have to scramble again — and just a few days before the opener.

Conor McDermott is listed as Brown’s backup, but he has been limited this week while recovering from an ankle injury that occurred in training camp. Rookie fourth-rounder Max Mitchell is another option, as is Grant Hermanns, who’s currently on the practice squad.

The Jets could also potentially flip Fant back over to the left side, where he was solid last season in place of an injured Becton. But Fant has also been limited by a knee issue.

“I’ve been in other situations where you go out there with a bunch of young guys that, yeah, they might of had all August together, but they haven’t played Calais Campbell or the Baltimore Ravens’ defense before, so that’s a whole other concern,” LaFleur said. “The cool part about this offensive line is they played a lot of football games on Sundays and there’s no practice that can get you to that moment.

“It’s just that experience and that preparation that those guys have gone through that you feel confident in them.”

As long as they all get on the field — which looks like less of a possibility for Brown this week.

“We still have to go out there and do our jobs,” left guard Laken Tomlinson said. “Obviously, there’s something going on with Duane and I’ll leave that for Coach Saleh to comment on, but I still have a job to do. So I’m focused on that right now and focused on Baltimore.”

NOTES: Special teams ace Justin Hardee fully practiced after being limited Wednesday by a calf ailment. … CB D.J. Reed (knee) was limited for a second straight day, but is expected to play Sunday. 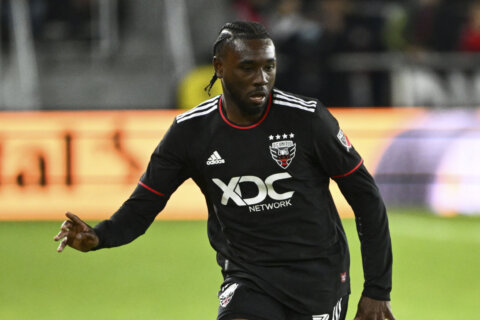