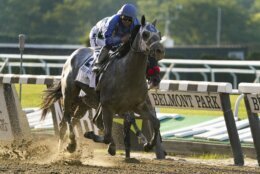 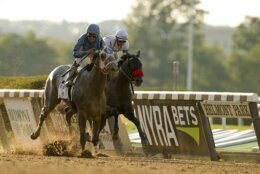 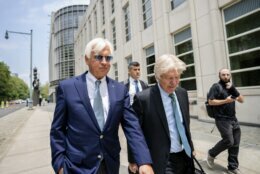 The Classic field was among the 196 horses, including a record 56 from overseas, pre-entered Wednesday for the $31 million, 14-race world championships on Nov. 5-6 at Del Mar. Fans are returning to the Breeders’ Cup for the first time since the coronavirus pandemic kept them away last year at Keeneland.

Knicks Go is Cox’s other entry in the 1 1/4-mile Classic to be run Nov. 6 live in prime time on NBC. The Classic has implications for the Horse of the Year award.

Cox tied the record for most Breeders’ Cup wins with four last year.

Medina Spirit is overseen by Bob Baffert, the all-time leader among trainers in Breeders’ Cup earnings at nearly $36 million. He currently is embroiled in legal fights in New York and Kentucky for multiple positive drug tests involving some of his horses.

The Breeders’ Cup is allowing Baffert to enter horses (he has eight total), but he has to meet certain conditions, including stricter out-of-competition testing of his horses and greater security at his barn. He has agreed to the tightened standards.

After his Derby win on May 1, Medina Spirit tested positive for the corticosteroid betamethasone, which isn’t allowed on race day in Kentucky. The Kentucky Horse Racing Commission has yet to issue a final decision as part of its investigation into the matter.

Three of Baffert’s Breeders’ Cup pre-entries — Barossa, Corniche and Pinehurst — are in the $2 million Juvenile, whose winner is tabbed as the early favorite for the next year’s Kentucky Derby. Besides Baffert’s trio, Todd Pletcher, Christopher Davis and Hideyuki Mori have two runners each.

However, Baffert has been banned from the Derby in 2022 and 2023 as part of his suspension by Churchill Downs.

The New York Racing Association wants to ban Baffert from running at its tracks. He has had five failed drug tests dating back to May 2, 2020.

Another of Baffert’s top entries is Gamine in the $1 million Filly & Mare Sprint, which attracted just six other runners, perhaps because of his filly’s intimidating presence.

Others pre-entered in the $6 million Classic are Art Collector, Express Train, Idol, Max Player, Stilleto Boy and Tripoli. Stilleto Boy could run in Dirt Mile instead.

Del Mar is hosting the richest two days in North American racing for the second time since 2017.

Final entries and the post-position draw is Monday.

The world championships will open with five races for juveniles in what’s billed as Future Stars Friday on Nov. 5, followed by nine races on Nov. 6.