A night after needing three sets and more than three hours to get by, Rafael Nadal was eliminated 6-4, 1-6, 6-4 by 50th-ranked Lloyd Harris of South Africa under the lights on Thursday at the hard-court tournament.
Listen now to WTOP News WTOP.com | Alexa | Google Home | WTOP App | 103.5 FM
(1/17) 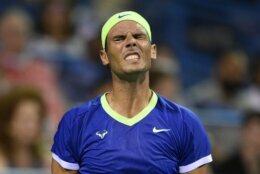 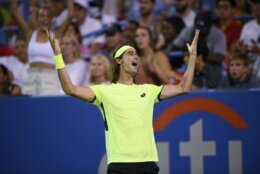 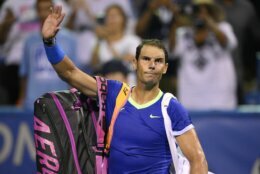 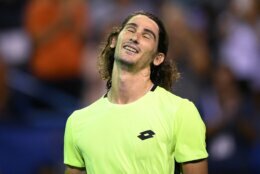 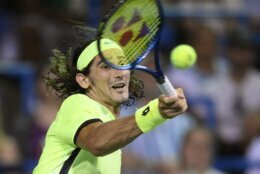 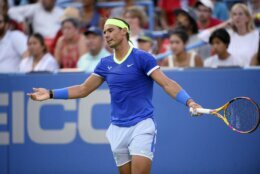 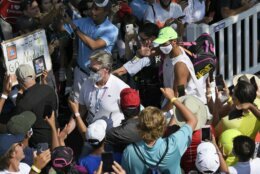 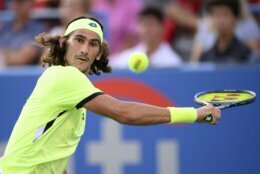 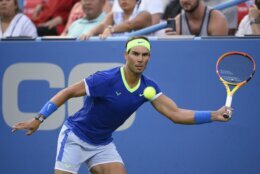 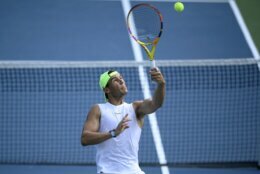 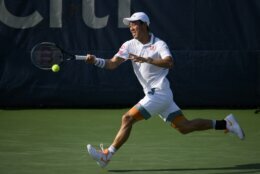 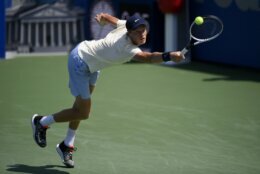 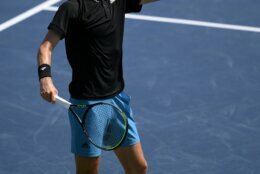 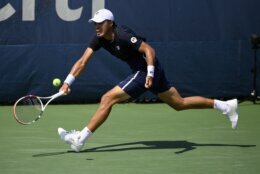 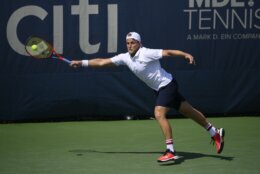 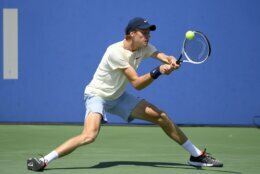 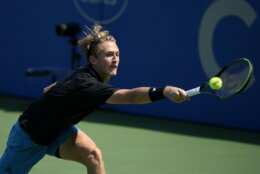 WASHINGTON (AP) — The good news for Rafael Nadal was that his painful left foot felt much better Thursday at the Citi Open. The bad news? His debut appearance at the tournament ended after two rough outings.

A day after needing three sets and more than three hours to get by at the hard-court tuneup for the U.S. Open, Nadal was eliminated 6-4, 1-6, 6-4 under the lights by 50th-ranked Lloyd Harris of South Africa.

He is a 20-time Grand Slam champion. Harris has only once made it as far as the third round at a major.

“All the credit to him that he played aggressive,” Nadal said. “He played well. He was brave.”

The 24-year-old Harris is 6-foot-4 with big serves that regularly topped 120 mph and produced 16 aces Thursday.

Nadal’s, admittedly, was not. That might be a sign of rust, which would be understandable given that the 35-year-old Spaniard hadn’t competed anywhere in nearly two months — not even picking up his racket for about three weeks after a semifinal loss to Novak Djokovic at the French Open.

Nadal skipped Wimbledon and the Tokyo Olympics and certainly never quite played the way he can during his first trip to the U.S. capital.

Thursday’s match ended when Nadal got broken for the second time, with Harris dropping his racket in disbelief after delivering a lob winner to close the proceedings.

“I played this last game really bad,” said Nadal, who was the top seed. “My serve was not working the proper way.”

This was less of a physical tug-of-war between a pair of heavy hitters than Nadal’s victory over 192nd-ranked Jack Sock on Wednesday, which was decided by a third-set tiebreaker.

About 3 1/2 hours before returning to the main stadium to face Harris, Nadal made his way to tiny Court 5 for a training session.

As fans shouted “Vamos, Rafa!” and snapped photos and video with their phones from the stands at an adjacent court, Nadal didn’t do much running. Instead, he mostly stayed in place while smacking groundstrokes, then practicing volleys, serves and returns for 45 minutes with Emilio Gomez, a 29-year-old from Ecuador who is ranked 165th and lost in the Citi Open’s first round.

Not at all taxing by Nadal’s usual exacting and exhausting standards.

And against Harris, when the points mattered, it took Nadal a bit to get going. It wasn’t really until the second set that he seemed into it, as did the fans, many of whom rose to salute when Nadal broke to lead 3-1 with a forehand passing winner.

But down the stretch in the third set, it was Nadal, surprisingly, who faltered. He now will try to regroup ahead of the U.S. Open, which he missed last year during the pandemic but won the last time he entered, in 2019.

Harris, meanwhile, continues the pursuit of a first ATP title, which would leave him 87 behind Nadal’s total.

“To be honest, tennis-wise, I did a lot of good things,” Harris said. “I think the best thing was to stay in the moment, keep my composure.”

Next for him is a match against 2015 Citi Open champion and 2014 U.S. Open finalist Kei Nishikori on Friday.

Other quarterfinals: Mackie McDonald vs. Denis Kudla in an all-U.S. contest, No. 5 seed Jannik Sinner of Italy vs. Steve Johnson of the U.S., and No. 11 John Millman of Australia vs. Jenson Brooksby of the U.S.

Sinner beat Sebastian Korda 7-6 (3), 7-6 (3) in a matchup between two youngsters considered possible future stars of men’s tennis who also happen to be doubles partners this week.

Sinner, 19, reached the French Open quarterfinals last year and the fourth round there this year before losing to 13-time champion Nadal each time. Korda, 21, is only the third man in the last 50 years to reach the fourth round in his debuts at both Roland Garros and Wimbledon.

They got to know each other on tour; Sinner said Korda texted him about joining up in doubles. After facing each other on a breezy, 90-degree afternoon, they reached the doubles semifinals at night by beating Nick Kyrgios and Frances Tiafoe.

“He’s going to be dangerous in the future,” said Auger-Aliassime, a Wimbledon quarterfinalist last month.

For Nadal, the past two months were not easy.

“I had a lot of problems with my foot. I was not able to practice all the days that I really wanted, but I did as much as I could,” he said. “And I tried hard here, no?” 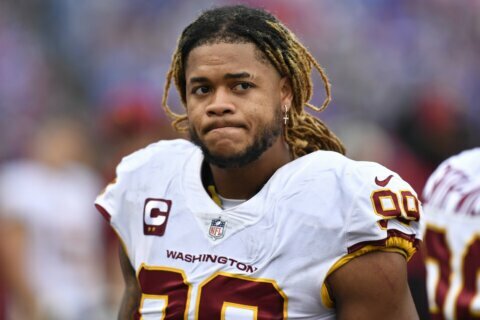 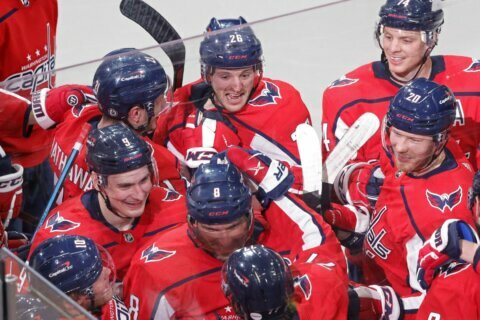