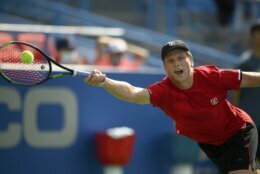 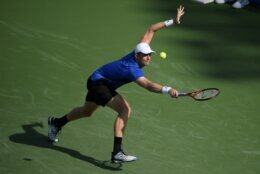 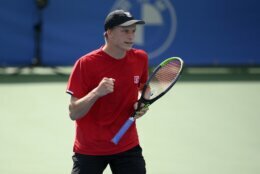 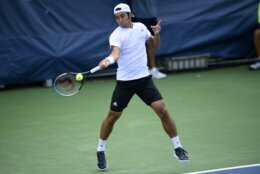 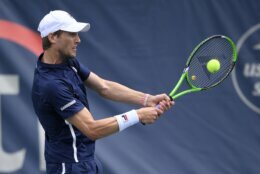 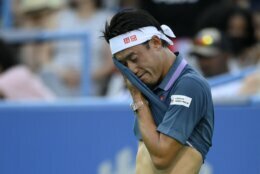 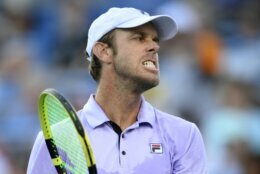 WASHINGTON (AP) — Jenson Brooksby found himself in hardly an ideal spot in the first set of the first round of the Citi Open against big-serving Kevin Anderson: trailing the two-time Grand Slam runner-up in a tiebreaker.

Brooksby, a 20-year-old American who lost to Anderson in the final of another ATP tournament two weeks ago, turned things around, grabbed the last six points of that set Monday and went on to beat Anderson 7-6 (4), 6-3 in the hard-court tuneup for the U.S. Open.

“Playing him recently definitely helped me this time, because my coach gave me some better strategies this time, compared to the first time, like on the return on other things, and it worked pretty well,” said Brooksby, who finished 2020 ranked outside the top 300 but is now 130th.

“I was just frustrated with myself. I made multiple bad decisions in a row in the points,” Brooksby said about falling behind 4-1 in the tiebreaker.

“I knew I could pull off a comeback in the ’breaker and then I just kind of kept it going in the second,” he said, “so I was proud of that.”

Nishikori, coming off a quarterfinal run for Japan at the Tokyo Olympics, broke Querrey three times while going 5 for 5 on the break points he faced.

Brooksby had faced a set point Monday while serving down 6-5, but Anderson put a backhand into the net.

Then Anderson’s 113 mph ace — one of his 11 aces on the 80-degree afternoon — provided him with that substantial edge in the tiebreaker. But the 35-year-old South African, the Washington runner-up in 2017, wouldn’t take another point in that set.

Brooksby used drop shots to collect a couple of points and was helped by some misses by Anderson, including an unforced error on a backhand that closed a 14-stroke exchange to end the set.

Anderson has been ranked as high as No. 5 and was a finalist at the U.S. Open in 2017, losing to Rafael Nadal, and at Wimbledon in 2018, losing to Novak Djokovic. Anderson is currently 75th.

Brooksby saved both break points he faced and earned the match’s only break in the next-to-last game.

He’ll face 16th-seeded Frances Tiafoe, a Maryland native, under the lights of the Citi Open’s main stadium on Tuesday night.

Another Californian, Marcos Giron, kept coming back — he dropped the first set, then was down in each of the next two — until he put together a 4-6, 6-4, 7-6 (1) victory over qualifier Illya Marchenko.

“I just had to take a deep breath in, think about what I had to do and change my strategy a little bit. Once I was able to get my feet into the match, I thought I was able to adjust pretty well there in the second and again in the third,” said Giron, who faces No. 7 seed Cameron Norrie next. “When I was down in the third, I knew I had come back in the previous set and I could do it again.” 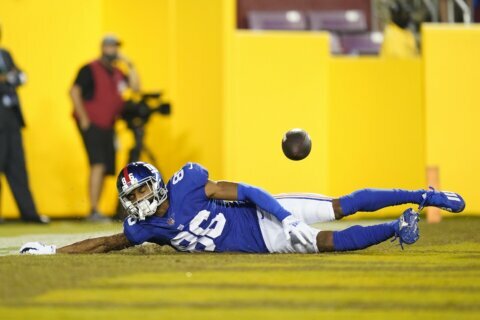