Wizards and Caps apply to allow fans at games, but are being patient

The Wizards and Capitals have re-submitted their application for a waiver to begin allowing fans at Capital One Arena, as Monday was the first day professional sports teams were permitted to do so by the office of Mayor Muriel Bowser.
Listen now to WTOP News WTOP.com | Alexa | Google Home | WTOP App | 103.5 FM

Wizards and Caps apply to allow fans at arena, but are being patient originally appeared on NBC Sports Washington

The Wizards and Capitals have re-submitted their application for a waiver to begin allowing fans at Capital One Arena, as Monday was the first day professional sports teams were permitted to do so by the office of Mayor Muriel Bowser. Now, they expect to wait several weeks before learning the next steps as the D.C. government continues to monitor efforts to contain the coronavirus.

The Washington Nationals were recently cleared to allow 5,000 fans when their season begins on April 1 when they host the New York Mets. But the Wizards and Capitals, represented by Monumental Sports and Entertainment, expect to hear more information the week of April 5.

Last week, MSE released an official statement on the matter:

“Monumental Sports & Entertainment, which operates Capital One Arena and the Washington Capitals and Wizards, has submitted to the D.C. Government our request and plan to safely allow fans back into the arena,” Monica Dixon, Chief Administrative Officer and President, External Affairs said. “We appreciate Mayor Bowser and her administration’s diligence through this process.”

MSE has been referencing the timeline the government applied to the Nationals, which took weeks before they got the official word. Bowser’s staff has shown a good deal of caution when it comes to relaxing Covid-19 restrictions.

Because of that, those representing the Wizards and Capitals are staying patient in the process, NBC Sports Washington was told. The information coming out of the Mayor’s office could change week-to-week or even day-to-day given the unpredictability of the virus, with new variants emerging and the continued increase in vaccinations.

What may also play a factor is that the Wizards and Capitals play indoors. The Nationals play outdoors in a stadium that holds more than double the capacity of Capital One Arena – 41,000 compared to 20,000 fans – and they were only granted a 5,000-fan limit.

The Capitals’ final regular-season game is set for May 8, while the Wizards’ schedule runs until May 16. There is also the possibility one or both of the teams qualifies for the postseason. 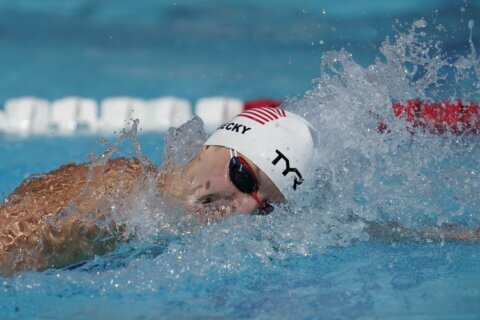