The women's stories are among those told in the documentary "Invisible Warriors - African American Women in World War II." King and McDougald were featured guests at a screening of the documentary at the library, which was co-sponsored by the Embassy of the Kingdom of the Netherlands.
Listen now to WTOP News WTOP.com | Alexa | Google Home | WTOP App | 103.5 FM 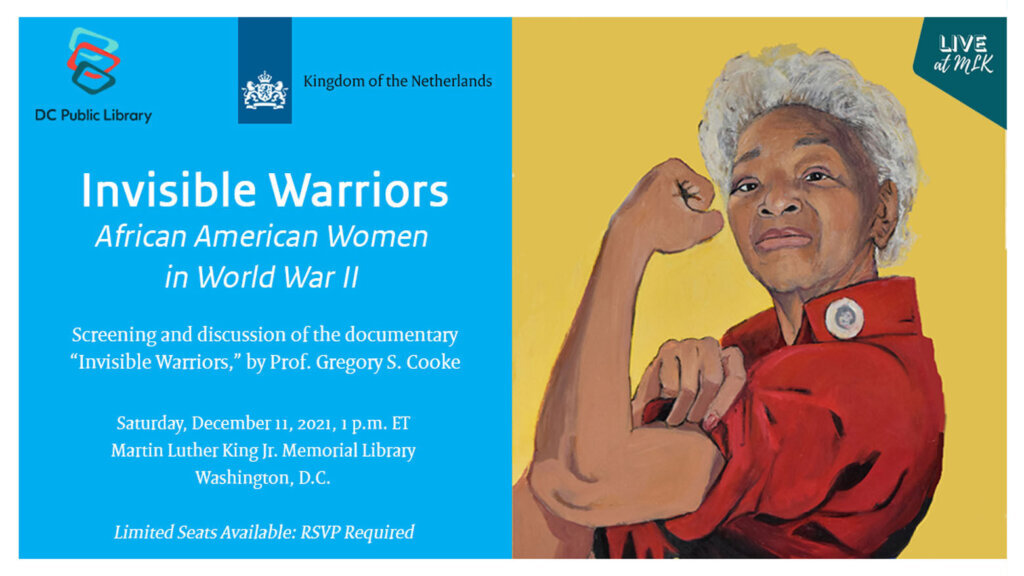 Susan King, 97, of Baltimore, Maryland, and Hilda McDougald, 101, of Washington, D.C., are among the estimated 600,000 African American women who worked in industry and government during World War II.

The women’s stories are among those told in the documentary “Invisible Warriors — African American Women in World War II,” King and McDougald were featured guests at a screening of the documentary at the library, which was co-sponsored by the Embassy of the Kingdom of the Netherlands.

“Baltimore city in 1942 was highly segregated,” recalled King, who went to work at Eastern Aircraft in Baltimore, riveting parts for the Navy’s F4F Wildcat fighter plane. “It was the first time we, as Afro-American girls, were able to eat in a cafeteria with white workers,” she said.

King could be considered a real life “Rosie the Riveter” — the celebrated icon of World War II that represented women working in the national defense industry, while men were called away to battle.

But King and the rest of the “Invisible Warriors” faced the added challenge of racism as they helped aid their nation in winning the war.

McDougal’s life had already taken her from the cotton fields of Louisiana to business school in New Orleans, when she heard a clarion call to join the war effort.

“The professor came and said that they needed so many people to come to Washington. So I was one of the ones that was picked… I worked for the Treasury Annex,” McDougal said.

Outside of the U.S., the efforts of these women to help win the war hasn’t been lost.

Netherlands Ambassador Andre Haspels was on hand at MLK Library  to award these women certificates of appreciation on behalf of his country. During much of WWII, the Dutch were besieged by Nazi forces, and are grateful today for the immense effort it took to defeat them.

“It’s important that we remember their role in the second World War … not only the challenge of doing, let’s say, ‘men’s work,’ but they also had to fight racism, they had to fight sexism, so they actually had a double-under privileged position. And you need stamina, you need strength to really play that role as they have done so.”