Summer jam: At this camp, kids learn how to throw down the rock

While people of a certain age were busy growing up, the meaning of "summer camp" quietly expanded. This is a story about happy little campers who rock out ... or are learning to, anyway.
Listen now to WTOP News WTOP.com | Alexa | Google Home | WTOP App | 103.5 FM

Fair enough. It’s called “camp” for a reason, and The Great Outdoors could probably do a kid some good. It builds character (allegedly) — and gives them something to gripe about 30 years later.

But while those people of a certain age were growing up, the definition of “summer camp” quietly expanded. It’s not just about giant spiders, dim flashlights and merit badges anymore. Some camps, like the one this story is about, are actually kind of cool.

This jam is about happy little campers who rock out … or are learning to, anyway.

It’s Thursday afternoon at the School of Rock in Vienna, Virginia. A few dozen campers are hanging around outside in the parking lot. Lunch break is winding down. It’s almost time to return to the rehearsal room and resume the business at hand.

A motley crew? Hardly. Their vibe is reserved and approachable. This isn’t the shoplifting-and-vandalism set. They all look like they do their chores, study hard and obey their folks. Good kids.

This bunch comprises two different summer camps running at the school, explains Brian Highsmith, the school’s studio manager. One is more advanced. The other is for the “rookies.”

“We run the gamut, from a student who’s never picked up an instrument to students who have been playing for years and are taking private lessons with us,” he says.

Highsmith and the school’s assistant music director, Dante Dalton, corral the campers into a cozy rehearsal room to run through one of the songs they’ve been working up all week, a cover of “I Love Rock ‘n’ Roll” by Joan Jett and the Blackhearts. The song isn’t new, but it’s sure new to them, and while the performance might be a little rough around the edges, the fun is infectious.

(Check out the video above.) 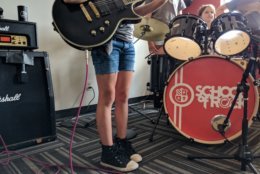 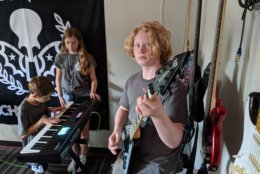 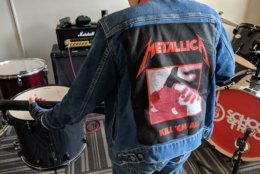 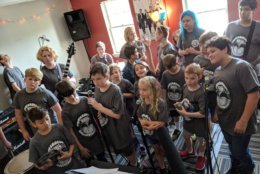 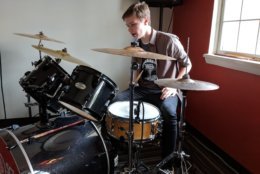 Camp starts on a Monday. The goal is to have a set list of about eight songs ready by Friday, when they’ll perform for friends and family. For six hours each day, the campers rehearse and practice together, then work with interns and other instructors to learn chords, words and beats.

“Through all that, there’s a ton of bonding that happens,” says Travis Adams, the school’s music director. “Every kid that comes in is pretty nervous and anxious on the first day … and then throughout the week, they just get more tight with each other and more familiar with each other’s style and interests and all that.”

The school — which is staffed by professional, working musicians — encourages a spirit of cooperation, said Aiden Reid of McLean. The 14-year-old plays the drums. (His twin sister, a guitarist, is playing during this session, as well.)

“There’s hardly any bickering or disagreements,” he said. “It’s a really interesting system, because people who are having trouble with an instrument  — there’s always someone else who has more experience. And then they can help that person … and everyone learns from each other.”

The campers are also learning one essential quality when throwing down the rock: showmanship. An awkward stage presence is a bad habit the school aims to eradicate early on, whether it’s a singer staring at their feet or a bass player hiding behind the drummer.

“That’s their shining moment,” Highsmith says. “We want them to step up, own it and just take charge of the stage without taking away from anyone else’s experience.”

Bret Jackman, 12, is a good example of someone who knows when it’s time to shine. On the mic, he seems to relish being the center of attention, with moves that evoke Mick Jagger. Seriously.

In an exclusive interview with WTOP, however, the future superstar is surprisingly down to earth and mindful of what’s really important.

“This camp makes me feel like I just want to keep getting better and better, until eventually I can be able to play full, beautiful songs in front of people,” says Bret, whose focus is the keyboard.

Indeed, such camps aren’t just building confidence. They’re inspiring kids to create. Nikki Bellini, for instance, started going at age 9. At the time, she was playing violin in an orchestra.

“My sister and I joined at the same time,” she remembers, “and she was on guitar, I was on the vocals, and then we just loved it so much that we could actually play music we enjoyed listening to in our free time.”

The McLean High graduate is now an assistant camp director, and she hopes to make a career out of the music she loves. This fall, she’ll start her second year at Boston’s Berklee College of Music, with a dual major in songwriting and music business.

“It’s so amazing to be able to take what I know, the opportunities I’ve found, and be able to share that experience with them,” says Bellini.

If you want to get your child on the fast track to cool — and really, why wouldn’t you want that? — there are a few other music camps around the area that are not just about clarinets and Beethoven (not that there’s anything wrong with that).

Check them out … and stock up on some earplugs. 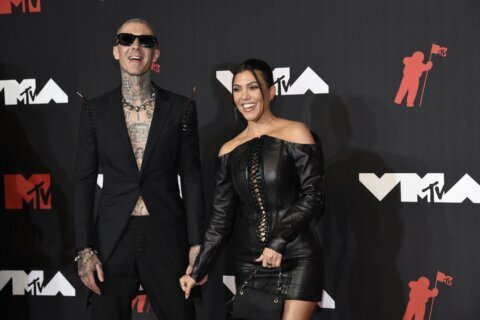