Thousands across Haiti demand ouster of PM in new protest

The occasional crack of gunfire mixed with the shouting and clapping of protesters as they marched through streets blocked by rocks, trucks and burning tires.

“Ariel, you have to go! Go, Ariel! Go, Ariel!” a crowd in the capital of Port-au-Prince yelled.

One protester held up a sign that read, “DOWN WITH MISERY” while another yelled expletives at the government as he lamented a severe lack of jobs.

Haitians have organized a growing number of protests amid an increase in gang-related kidnappings and killings, a spike in the prices of basic goods and a severe lack of fuel amid an inflation rate that has hit 30%.

On Tuesday, the prime minister’s office issued a statement saying that it was “aware of the seriousness of the situation,” and that Henry would take several measures including implementing social programs to alleviate extreme poverty and ensure that more fuel is available at gas stations. Henry called for calm and urged people not to give in to political manipulation.

Haiti has grown increasingly unstable ever since the July 7, 2021 assassination of President Jovenel Moïse, with gangs growing more powerful as Henry’s administration keeps pushing back the date for general elections scheduled to be held last year.

Mexican drug lord claims attack was aimed at him 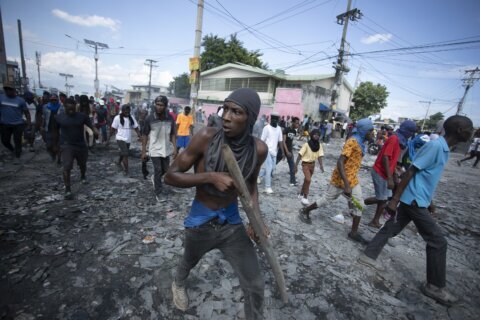