SAN SALVADOR, El Salvador (AP) — El Salvador’s congress voted Wednesday to strip a politician accused of making a deal with the country’s powerful street gangs of the legislative immunity that had prevented his prosecution.

Sixty-six of the Legislative Assembly’s 84 lawmakers voted to support the attorney general’s petition to open Norman Quijano to prosecution. Twelve lawmakers from his conservative party left the chamber for the vote.

Quijano was elected this year to serve a five-year term in the Central American Parliament. Prior to that he had served as a federal lawmaker and mayor of San Salvador. Quijano left El Salvador just before the end of his legislative term earlier this year before his election to the regional body.

In November, Attorney General Rodolfo Delgado asked the Legislative Assembly to strip Quijano of immunity so he could be prosecuted for alleged electoral fraud and illicit association.

The allegations stem from the 2014 presidential campaign in which Quijano was the candidate of the conservative Nationalist Republican Alliance party. Prosecutors say the former San Salvador mayor paid the country’s powerful street gangs to support his presidential campaign. Quijano lost to Salvador Sánchez Cerén of the leftist Farabundo Martí National Liberation Front.

The Attorney General’s Office had previously requested Quijano’s immunity be lifted in 2020, but the Legislative Assembly at that time denied the request.

Last week, the U.S. Treasury accused officials from current President Nayib Bukele’s administration of engaging in secret negotiations with the gangs. The U.S. government alleged they had bought the gangs’ cooperation in lowering the country’s homicide rate and sought their support in legislative elections earlier this year.

Bukele has strenuously denied the allegations. 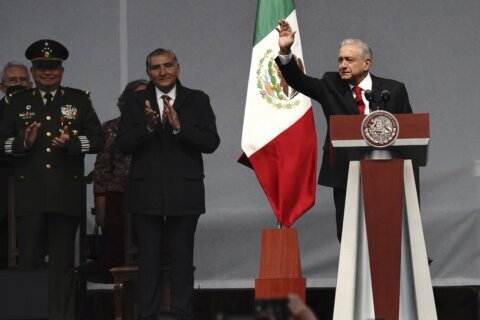 Mexican president says he has drawn up a ‘political will’