In 2019, Bianca gave birth to the first jaguar cub ever born from artificial insemination. Now, the 8-year-old could once again advance the cause of preserving her species. That is, if all goes according to plan and she becomes pregnant using semen that is frozen.

Scientists say frozen semen would be easy to transport, and so help ensure genetic diversity of jaguars whose populations are increasingly fragmented by habitat destruction, according to Lindsey Vansandt, a theriogenologist — a specialist in veterinary reproductive medicine — at the Cincinnati Zoo & Botanical Garden.

“The population sort of becomes smaller and smaller, and then you get inbreeding which has lots of bad consequences,” Vansandt told The Associated Press moments after performing the procedure on an unconscious Bianca atop a surgery table.

“If we can take sperm from one male and inseminate a female from another location, we can keep their gene flow moving and keep the population more healthy,” Vansandt said.

Wildlife experts from the Cincinnati Zoo, the Federal University of Mato Grosso and the environmental organization Mata Ciliar have for years developed their insemination program for the Western Hemisphere’s largest feline. They work with individuals rescued from habitat loss in the Amazon rainforest, Cerrado savanna and Pantanal wetlands, all of which have suffered a surge of deforestation and fires in recent years.

Some jaguars badly injured by blazes in the Pantanal last year required transport to specialized facilities for care. Others either died or were displaced.

“Look what happened in the Pantanal, the Cerrado,” said Cristina Adania, a veterinarian and coordinator of Mata Ciliar. “They are being killed before we even get to treat them, so something has to be done.”

This year, a study published by wild cat conservation group Panthera, the Federal University of Mato Grosso do Sul and partners estimated that almost 1,500 jaguars were killed or displaced by fire and habitat loss in Brazil’s Amazon from 2016 to 2019.

Displaced jaguars are unlikely to thrive in new environments, which may be the range of another territorial individual, according to Panthera. Plus, they are unfamiliar with where best to find prey, which can leave them hunting livestock, putting them in ranchers’ crosshairs.

The International Union for the Conservation of Nature’s Red List classifies jaguars as “near threatened” — a grade above vulnerable — though their population is on the decline and their habitat “severely fragmented.”

Bianca was still a cub in the Amazon when she was rescued and delivered to Mata Ciliar. Like some of the wild-born cats living at the Brazilian Center for the Conservation of Neotropical Felines in Jundiai, she can’t be reintroduced to the wild, Adania said. Another female jaguar at the facility, named Tabatinga, was also artificially inseminated on Thursday.

Unfrozen jaguar semen only stays good for a few hours, Vansandt said. Frozen semen can be used for years, but typically has a lower success rate for felines than with humans.

If Bianca’s case is successful, it would remove the strain and stress of transporting carnivores that weigh as much as 300 pounds to mate in person. Even when a jaguar is transported, there’s no guarantee it will get along with its would-be mate, said Adania.

“This is good for genetic diversity, but also towards that larger goal of increasing the number of jaguars,” said Vansandt. “The dream is to increase the numbers to a stable population.” 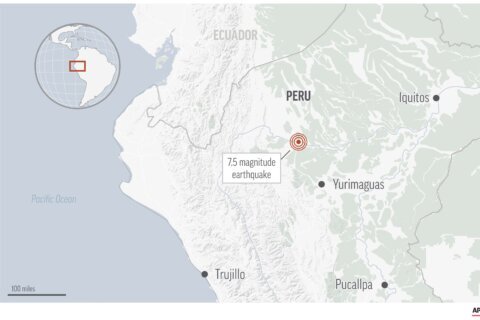