More than dozen slain in Peru, allegedly by Shining Path

LIMA, Peru (AP) — More than a dozen people were slain in a remote area of central Peru by suspected members of the Shining Path rebel group, just two weeks ahead of the presidential runoff election, authorities said Monday.

Peru’s police chief, César Cervantes, told the local TV channel N that at least 18 people were killed, while the military said in a press release there were 14 victims.

The killings took place in a community in Vizcatan de Ene, which is in an area of the Peruvian Amazon that authorities believe is being used as a hideout by remnants of the Shining Path movement that battled the government in the 1980s and 1990s. The area is also known for being used by some local criminal groups to produce cocaine for trafficking abroad.

Leonidas Casas, a local official, told The Associated Press that the victims were inside two bars, one in front of the other, when armed men stormed into them and opened fire. Some women and at least one child tried to hide in a room, but they were also killed. Some of the bodies were burned, he said.

Casas said authorities found some pamphlets signed by Shining Path saying the group will “clean up” the country of bars, “parasites” and “corrupts.”

The June 6 runoff pits leftist Pedro Castillo against right-leaning Keiko Fujimori, the daughter of former authoritarian President Alberto Fujimori, who presided over the fight against Shining Path for two decades. He was later convicted of human rights abuses during the war.

In 2016, a day before that year’s presidential election, a similar incident happened in a remote area, when alleged members of Shining Path ambushed a military convoy traveling to a community to guard the elections. Eight soldiers and two civilians were killed.

President Francisco Sagasti condemned the attack on his Twitter account, and he ordered the police and armed force to go to the area, “so this terrorist action doesn’t go unpunished.”

Castillo, the leftist candidate in the presidential runoff, also decried the killings. “We are not going to tolerate any violence act,” he said.

Shining Path is a Maoist-inspired group that began its fight against Peru’s government in 1980, but was weakened by the 1992 capture of its leader, Abimael Guzmán, and many of its other leaders.

Guzmán has been convicted and sentenced to life in prison twice — for a 1992 car bombing in the capital that killed 25 people and injured 155 and for a 1983 massacre in an Andean village.

A truth commission found that between 1980 and 2000 fighting among rebel groups, the government and self-defense patrols left up 70,000 dead in Peru. 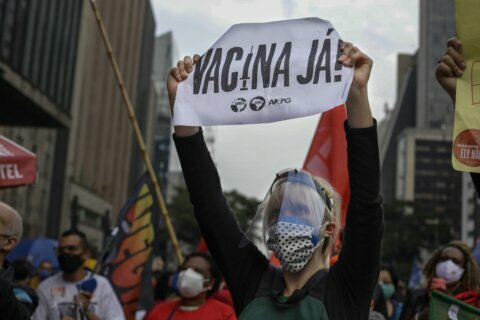