Coronavirus News: Fairfax Co. votes to increase substitute teacher pay | Is it time to get a COVID-19 booster? Which one? | Local cases of COVID-19 | How many in DC region are vaccinated?
Home » Health & Fitness News » 'Pay attention:' Falls Church… 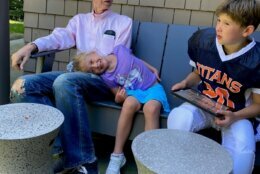 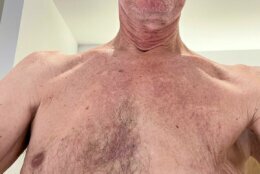 Considering how rare breast cancer is in men, Steve Cone said he feels he must be special to have gotten it twice — and it’s turned the Virginia man into an advocate.

“I should talk about it,” Cone, of Falls Church, said. “I kept getting, frankly, irritated every October for the last 10 years. Breast Cancer Awareness Month and men are never mentioned, ever. Never.”

Cone was diagnosed at stage 1 twice, first in 2010 and then in 2012. Each time he noticed a cyst on his chest that didn’t hurt, but he got evaluated, diagnosed and treated successfully.

Men make up about 1% of the approximately 250,000 annual breast cancer cases.

“Two to 3,000 men are diagnosed each year. So, it is rare in men, but it happens on a regular basis,” Dr. Christopher Gallagher said.

Gallagher is the medical director of cancer services at MedStar Washington Hospital Center.

He said men and women share similar risk factors for developing the disease, such as being overweight, excessive alcohol use or simply getting older. About 5% to 10% of breast cancers run in families and are hereditary among people with BRCA1 and BRCA2 gene mutations.

Cone has no family history of breast cancer and no issues related to the BRCA genes.

“The number one risk factor for breast cancer is getting older, more than anything. So there’s risk factors for which we don’t have any control over,” Gallagher said, adding that for lack of a better way of thinking about it, it’s just bad luck.

“There’s certainly lots of study going on, looking at certain environmental risk factors during vulnerable periods of a person’s life, whether it’s as infants or children or when they go through puberty,” Gallagher said. “We’re probably all doing something right now that we shouldn’t be doing, that we’re going to know about in 20 years, right? That puts us at risk for things,” Gallagher said.

In the meantime, both Gallagher and Cone emphasize that lumps and bumps need to get checked out.

“If you feel something, you have to go say something to somebody,” Gallagher said, with the message echoed by Cone — “Men should pay attention to themselves. And they should be aware that men get breast cancer.”