How can a 3D printer help surgeons perform a delicate procedure on a patient they have never met before, a patient who has not even been born yet?

At Orlando Health Winnie Palmer Hospital for Women & Babies in Florida, a team is using a combination of MRI and ultrasound imaging along with 3D-printing technology that lets doctors identify potential obstacles and reduce the risk of surgery on babies with spina bifida, the hospital said in a statement.

Spina bifida is a birth defect that happens when the spinal cord fails to close normally during development. The condition can cause a lifetime of neurological disabilities, including an inability to walk.

“I’m used to operating on patients I know, or patients I met before, if you think about it, I’m about to operate an a fetus inside the womb. And I’ve never met this patient before,” neurosurgeon Samer K. Elbabaa said. He’s the director of the Orlando Health Arnold Palmer Hospital for Children Neurosurgery.

Fetal surgery has typically looked at an ultrasound or an MRI, and “imagining how this defect is going to be once the womb is open and the back of the baby or the back of the fetus is exposed through the defect of the uterus,” Elbabaa said. Then surgeons start performing the surgery on a defect they have never seen before until that day.

Having the 3D-printed model helps understand the anatomical aspects of the defect and plan for the surgical technique. In addition, it helps doctors talk to the parents about the potential challenges of the surgery.

“They get to hold the model in their hands and understand exactly what the surgeon is about to do, what are the potential challenges the surgeon can tackle during the surgery,” Elbabaa said. 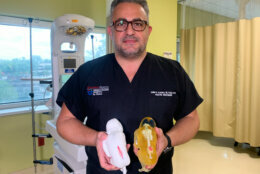 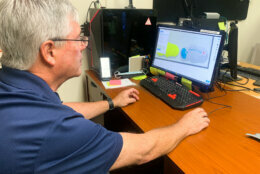 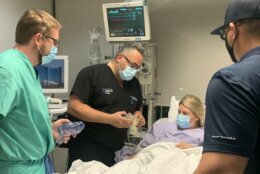 Since the hospital started doing the program, doctors have performed some 25 surgeries.

Fetal surgery, which has been around for many years, can improve the long-term outcome of children with specific birth defects, such as spina bifida.

A study funded by the National Institutes of Health and published in 2011, Elbabaa said, showed that benefits of fetal surgery on babies with spina bifida include improving the function in the legs, giving them a better chance to walk independently; improving their cognitive function; and helping reverse some of the anatomical changes in their brains by reducing the degree of fluid buildup in the brain — “or what we call hydrocephalus and the need for further surgery after birth.”

What does the surgery look like? It’s done before 26 weeks of gestation.

The surgery has to be done quickly and efficiently, as any potential challenges can affect the health of both the mother and the baby.

By using the 3D models, the surgeon knows how the defect and the lower back of the baby are going to look, what technology of techniques are needed for the operation, and it also helps parents understand the potential challenges, Elbabaa said.

“Those mothers are so brave. They go through two surgeries. One cesarean section or temporary cesarean section for the fetal surgery to get the work done and the baby, then put the baby back in the womb, then continue the pregnancy then deliver the baby again, via cesarean section around 37 weeks,” Elbabaa said.