Democrat Stacey Abrams was on stage for an hour with radio and television host Charlamagne tha God and rapper 21 Savage when she faced a question from a skeptical audience member.
Listen now to WTOP News WTOP.com | Alexa | Google Home | WTOP App | 103.5 FM

ATLANTA (AP) — Democrat Stacey Abrams was on stage for an hour with radio and television host Charlamagne tha God and rapper 21 Savage when she faced a question from a skeptical audience member.

“A lot of politicians speak about their plan and what they plan to do, but I also notice that I never hear a clear turnaround of when their plan will go into effect,” said Soheem Perry, who lives in suburban Atlanta. “If it doesn’t happen within the time that’s been promised, how should we feel about our vote?”

Perry captured the alienation some Black Americans feel about the political process. Democrats court their votes every election year yet sometimes struggle to deliver on certain promises. But in her bid to become America’s first Black woman governor, Abrams needs support even from disillusioned voters.

The concern is especially acute when it comes to Black men, who some analysts suggest have trickled recently to Republicans. A large majority of Black men have still cast votes for Democrats in recent elections, meaning the bigger fear in a tight race is that they won’t vote at all.

Abrams acknowledges the possibility. She built her national profile by insisting Democrats can compete in Georgia, a longtime Republican stronghold, if they attract marginal or disaffected voters, including Black men.

“If Black men turn out in the numbers and support me at the levels they’re capable of, I can win this election, because we know Black men sometimes punch below their weight class,” Abrams said at the event. “They’ve got reasons to be distrustful, and they’ve got reasons to be disconnected. And it is not only disingenuous, it would be bad practice, for me to not do the work to show that I understand.”

To maximize Black male support, Abrams has held a series of events targeting them. A recent gathering in an un-air-conditioned warehouse featured free food and T-shirts.

Abrams delivered bits of her standard speech in response to questions from Charlemagne, 21 Savage and civil rights lawyer Francys Johnson. But the topics were tilted toward the audience, with discussions of how Abrams opposes letting prosecutors use rap lyrics in gang prosecutions, how she wants to decriminalize — but not legalize — marijuana because she fears federal criminal charges, and how she believes Republican Gov. Brian Kemp has abandoned efforts to make Georgia’s criminal justice system less punitive.

“We need leadership that sees us, that serves us and that believes in us,” Abrams said. “The current governor has proven on every one of those metrics that he does not care.”

Black voters made up 29% of the general electorate during Abrams’ 2018 gubernatorial bid, according to Georgia voting records.

Abrams won 94% of Black votes, according to AP VoteCast data, and still lost to Kemp by about 55,000 votes out of 4 million cast. In 2020, President Joe Biden topped Donald Trump in Georgia by less than 12,000 votes out of 5 million. Strong turnout among white voters meant Black voters accounted for 27% of that electorate, with VoteCast showing that Biden won 92% of the Black vote.

In Georgia’s 2021 runoffs, which elected two Democrats to the U.S. Senate, Black voters cast 28% of ballots.

Yet in these and other elections, a significantly larger share of Black women voted than Black men.

Abrams’ team identifies 3.9 million Georgia voters as its universe of potential support, but knows she won’t get them all, said campaign manager Lauren Groh-Wargo. About 2.5 million are Black, Groh-Wargo said. Biden, at almost 2.5 million votes in 2020, won more votes than any Democrat ever before in Georgia. Abrams got 1.92 million votes in 2018.

A subtext in Abrams’ effort is that Black men may be overshadowed in the Democratic Party by Black women.

Black women have long been an anchor of Democrats’ coalition. They were credited with putting Alabama Democrat Doug Jones over the top in an upset U.S. Senate victory in 2017. Abrams’ 2018 near-miss forced a rethinking by white-dominated donor circles and media about Black women’s viability as statewide candidates.

With that in mind, Biden, as president, has elevated women of color. Kamala Harris, his vice president, is Black and of Jamaican and Indian descent, and the first woman to hold the office. Biden also delivered on a campaign promise to nominate the first Black woman to the Supreme Court, resulting in Ketanji Brown Jackson becoming the court’s 116th justice.

Nsé Ufot, who leads the New Georgia Project, a voting rights group Abrams founded as a state lawmaker, said it would be “disingenuous” to say the newfound attention on Black women is “not a factor” in how some Black men view politics currently. But Ufot said any resentments “are not as big a deal as the hand-wringing class” might think. “The question is whether she can make the hard sell, taking the case directly to Black men.”

Abrams herself disputes any characterization that her focus on Black men reveals a “weakness” in her campaign.

“Every candidate, every campaign has to work hard to make certain that people believe it’s worth voting, and that’s what I’m doing,” she told a gathering of Black journalists this week in Washington, adding that she’s trying to address “distrust and despair” among voters who “are not seeing the results they thought they would see.”

“The majority of Black men are exactly where they were a couple of years ago, which is that they’re consistent and loyal and partisan voters and supporters of Democratic candidates,” she said.

But Wright Rigueur said former President Barack Obama maxed out support from Black men, drawing some Black Republicans who’ve since moved back toward the GOP. She also said others are frustrated that previous Democratic victories haven’t had a big impact on their lives.

“There is a cross section of Black men that manifest their frustration with failures of the Democratic Party by saying, ‘You have to earn my vote,’” she said.

One of those is Tim Black, a Washington commentator who says he’s an independent. He warned in a recent video that it would a be a “slap in the face” to blame Black men if Abrams loses, and that no one has an “obligation” to back her.

“We’re tired as hell of being talked down to,” Black said. “Here’s a radical idea: Instead of telling us who to vote for, give us some tangible reasons to vote for you.”

Abrams seemed to sense that criticism at her event, holding up her policy ideas as ways to help people directly. “There’s a Twitter universe that presumes that if you don’t say exactly what they want to hear, you don’t have an agenda for Black men. I get it,” Abrams said. “It just so happens that I know that if the agenda for Black men works, it works for everyone.”

Groh-Wargo described voters overall as “exhausted” by the 2020 campaign, including the Senate runoffs two months after the presidential election. She acknowledged frustrations among less habitual Democratic voters who “showed up” to defeat Trump only to face a pandemic economy, inflation and nonstop campaigning.

“There’s a Black men’s Democratic problem in California. It’s not just us,” Groh-Wargo said. “There is softness because Black voters in America are having this collective experience. … People do not feel seen and heard.” But, she insisted, “They don’t feel that way about Stacey,” because Abrams is “showing up.”

For Perry, the voter who asked whether Abrams could keep her promises, that may be enough. He said Abrams didn’t fully answer his question, but his “gut feeling about her … is genuineness.” And, he added, “That’s what I normally feel like I don’t feel from politicians.” 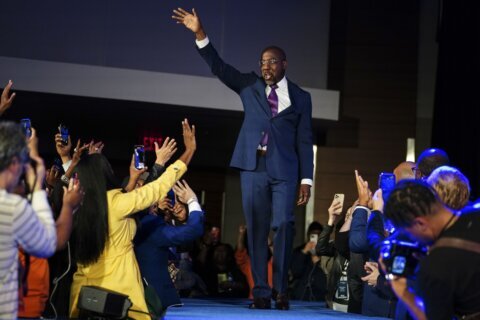 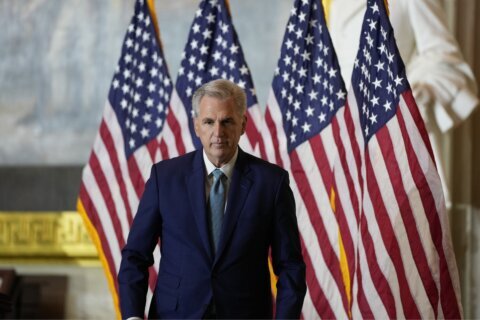