Social programs weak in many states with tough abortion laws

An AP review of federal data finds states with some of the strictest abortion laws are also some of the hardest places to have and raise a healthy child, especially for the poor.
Listen now to WTOP News WTOP.com | Alexa | Google Home | WTOP App | 103.5 FM
(1/11) 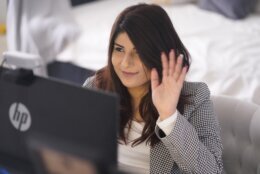 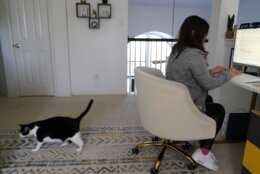 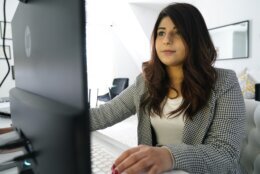 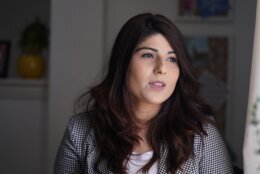 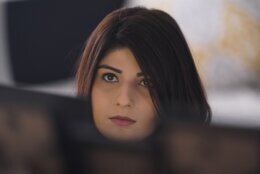 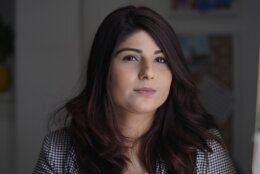 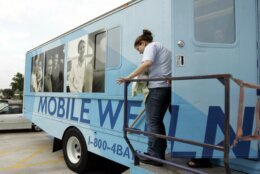 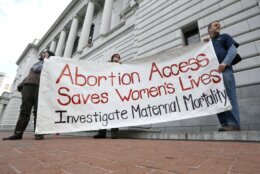 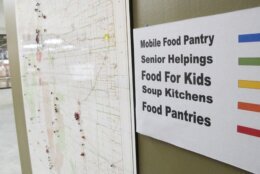 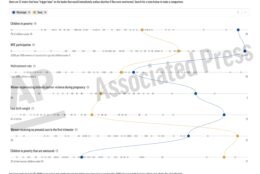 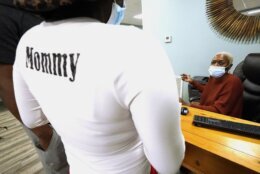 States with some of the nation’s strictest abortion laws are also some of the hardest places to have and raise a healthy child, especially for the poor, according to an analysis of federal data by The Associated Press.

The findings raise questions about the strength of the social safety net as those states are poised to further restrict or even ban abortion access following an expected U.S. Supreme Court decision later this year. The burden is likely to fall heaviest on those with low incomes, who also are the least able to seek an abortion in another state where the procedure remains widely available.

Mississippi has the nation’s largest share of children living in poverty and babies with low birth weights, according to 2019 data from the U.S. Census Bureau and the Centers for Disease Control, the latest available.

Texas has the highest rate of women receiving no prenatal care during their first trimester and ranks second worst for the proportion of children in poverty who are uninsured, the data show.

Laws from both states are at the center of the nationwide fight over access to abortion. The Supreme Court’s conservative majority signaled willingness in a Mississippi case to severely erode or even strike down Roe v. Wade, the 1973 decision that made abortion legal nationwide until a baby can survive outside the womb.

Numerous states with Republican majorities are poised to follow the strictest interpretation of the ruling.

If Roe is overturned, 26 states are certain or likely to quickly ban abortion, according to the Guttmacher Institute, a think tank that supports abortion rights. Many of those states ranked poorly in measurements that nonpartisan advocacy groups consider key to ensuring children get a healthy start.

Among them is Louisiana, which has the second-highest rate of babies with low birth weight and where 27% of children live in poverty.

Anti-abortion lawmakers there say they will further promote adoption and foster-care programs if abortion is banned.

“We win the biggest battle if Roe v. Wade is overturned. But then there’s still some battles that we must fight. And I’m going to love a child in the womb, at 5 years old, at 10, at 15,” said Louisiana state Sen. Katrina Jackson, a Democrat who opposes abortion and also wants to address health care and education needs.

While some women could travel out of state for abortions, “there will be people who will be forced to carry their pregnancies to term simply because they will not be able to get to that care,” said Destiny Lopez with the abortion-access group All*asterisk) Above All.

Data analyzed by the AP illustrates the hurdles pregnant women and their children face in states with the most stringent abortion restrictions and how access to resources can lag behind that of states that have more permissive abortion laws.

The AP analyzed figures from several federal government agencies in seven categories — metrics identified by several nonprofits and experts as essential to determining whether children get a healthy start.

They were: the percentage of children in poverty; participation in the Women, Infants, Children federal assistance program; the rate of child abuse or neglect; women experiencing intimate partner violence during pregnancy; low birth weight; women receiving no prenatal care in their first trimester; and uninsured children in poverty.

Texas inserted itself into the nationwide debate over abortion last year with an unusual law that leaves enforcement of an abortion ban after six weeks of pregnancy to civilians rather than state or local authorities — a law the Supreme Court largely left in place.

New Mexico, where Democrats last year overturned a pre-Roe abortion ban, ranks third highest for the share of its children living in poverty and for the percentage of pregnant women who experience violence from an intimate partner. It’s also among states with the highest rates of abuse and neglect for children under 5, also called maltreatment.

Delaware ranks fifth highest for the percentage of women who receive no early prenatal care and is among the states with the highest percentage of low birth weight babies. California is among the top five states — between Oklahoma and Arkansas — for the share of women and children on food stamps.

Those states are generally outliers. Overwhelmingly, the data show far more challenges for children and their parents in states that have passed abortion restrictions.

In response to AP’s findings, several conservative state lawmakers said women can give their newborns up for adoption and said they would support funding increases for foster-care programs.

In Oklahoma, Senate President Pro Tem Greg Treat, a Republican and longtime abortion opponent, said he would work to increase salaries for child-welfare workers and boost state money for foster parents who adopt, as well as send more public money to groups that offer alternatives to abortion.

“I have a 10-year history of trying to improve our rankings there,” he said. “So, yes, there’s going to be a commitment there, but it won’t be a new commitment. It will be a continuing effort on our part.”

Others in Oklahoma say the teen birthrate, fourth highest in the nation, would likely increase if the Supreme Court overturns Roe v. Wade and a state “trigger law” banning most abortions takes effect. More than 10% of the 4,424 abortions in Oklahoma in 2019 were for women younger than 20, according to the most recent state health statistics.

Kathy Harms, who had her first child at age 16, worked jobs in retail and fast food to support her family and said she sometimes had to choose between paying the electric or the gas bills.

“We have to juggle which one we can risk getting turned off,” said Harms, executive director of Teen emPower, a teen-pregnancy-reduction group in Oklahoma. “It’s an endless cycle of stress and wondering if it is ever going to get better … every aspect of life is more difficult for single mothers.”

Some lawmakers and anti-abortion activists have said they believe that outlawing or severely restricting abortion would lead people to change their sexual behavior.

“We think that a decision from the court could very well affect the way that people regard being a mother or a father … that certain things might be done differently than they are now,” said Tony Lauinger, chair of Oklahomans for Life.

Others say that view isn’t realistic and doesn’t align with the reasons most women seek an abortion.

Maleeha Aziz, an organizer for the Texas Equal Access Fund, had an abortion when she was 20 after birth control failed. She was a recent immigrant from Pakistan and a college student sharing a one-bedroom apartment who knew she couldn’t afford to raise a child financially.

Her broader experience also reflected the health risks inherent in many pregnancies. She had a condition called hyperemesis gravidarum, which causes persistent, extreme nausea and vomiting.

“I was a vegetable. I could not move,” said Aziz, who later had a daughter. “Pregnancy is not a joke. It is the hardest thing that a person’s body will ever go through.”

“I can’t believe this is our reality,” she said.

Jazmin Arroyo, a 25-year-old old single mom in Kokomo, Indiana, had to stop working as a receptionist after her first child was born because she couldn’t afford day care on top of rent, a car payment and other expenses.

Indiana has the second-highest rate of women — 18% — who don’t receive prenatal care during their first trimester and has among the highest percentages of children in poverty without insurance, more than 9%.

Arroyo found a job as a restaurant host, but it didn’t offer insurance and she was already starting to drown in bills when she had her second child, who has a heart defect that required special care. She now has thousands in unpaid medical bills.

“I never could have imagined how hard it would end up being,” she said.

The reasons why people seek abortions are complex, but financial concerns are often a top factor, according to research from Diana Greene Foster, a professor of reproductive science at the University of California, San Francisco.

Children born to women who were denied an abortion and carried the pregnancy to term are more likely to live in a household where there isn’t enough money for basic living expenses, her work has found. When women can get abortions, the children they do have fare better.

“So there is a clear effect on poverty, but there is also an effect on child development,” Greene Foster said.

In states with strict abortion laws, performance on measurements such as access to health insurance for low-income people is linked in part to political realities: Leaders who have supported abortion restrictions for decades generally also have espoused small-government principles and opposed measures such as Medicaid expansion, said legal historian Mary Ziegler at Florida State University’s law school.

“The anti-abortion movement has made its political bones by relying on the GOP,” she said. “The GOP has not been in favor of expanding the social safety net for young children and pregnant people, and the anti-abortion movement, which may have otherwise wanted to do that, is not willing to expend political capital on that because its priority is abortion, basically, and nothing beyond it.”

In Texas, state Sen. Nathan Johnson, a Democrat who has unsuccessfully pushed to expand Medicaid to more low-income residents in the state, said he is heartened that lawmakers recently extended that coverage for new mothers and added guardrails to prevent eligible kids from losing health care. But he said much more needs to be done.

“I get tired of very important but relatively small measures like these two that are very specific acting as a substitute for an overall responsible state policy toward health care,” Johnson said.

Texas in 2005 created a program called Alternatives to Abortion. As with similar groups in other states, the program funds pregnancy counseling, adoption services and classes about life skills, budgeting and parenting.

“This social service network is really critical in our mind to right now supporting pregnant women and expecting families,” said John Seago, the legislative director for Texas Right to Life. “But also as we look forward to potentially a post-Roe Texas, these are the types of social services that are going to be even more in demand.”

Most such groups, known generally as crisis pregnancy centers, are not licensed to provide medical care.

While adoption can be an alternative, its expensive for adoptive families and has a fraught history in the U.S. marred at times by racism, said Dr. Joia Crear-Perry, an obstetrician-gynecologist who founded and serves as president of the National Birth Equity Collaborative. Children can end up lingering for years in the foster-care system, which is troubled in Texas.

Carrying babies to term also presents health risks. In Texas, 20% of women don’t get prenatal care in their first trimester, according to pregnancy-risk assessment data collected by the CDC in 2016, the most recent year for which data was available for the state.

A lack of prenatal care increases the risk of the mother dying or delivering a baby with low birth weight. Black women bear the heaviest risk: They are three to four times more likely to die in childbirth than white women, said Oriaku Njoku, executive director of the group Access Reproductive Care-Southeast, which provides abortion and reproductive counseling in seven Southern states. Some lack insurance, others live in counties without OB-GYNs.

“Our folks deserve better,” she said.