Biden warns of US peril from Trump’s ‘dagger’ at democracy

President Joe Biden on Thursday forcefully condemned Donald Trump’s relentless election-overturning efforts that sparked the deadly breach of the Capitol by his supporters and continues to motivate deep national division. He marked the anniversary by saying the rioters had held a “dagger at the throat of democracy” but failed to succeed.
Listen now to WTOP News WTOP.com | Alexa | Google Home | WTOP App | 103.5 FM
(1/22) 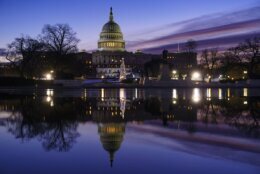 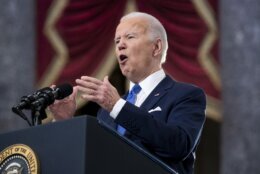 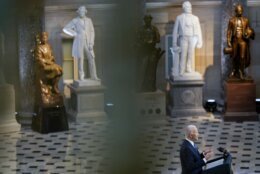 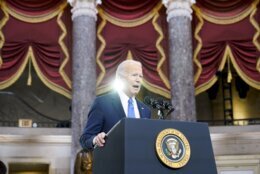 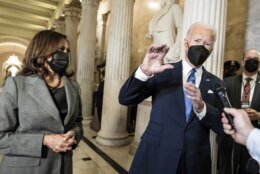 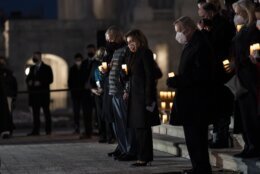 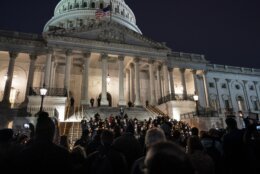 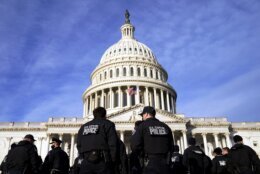 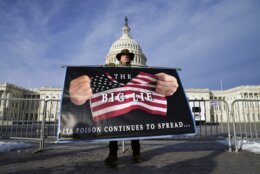 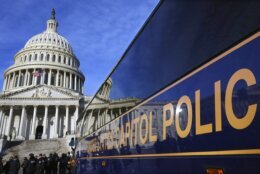 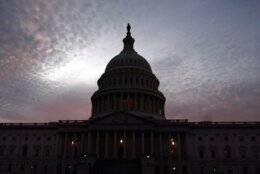 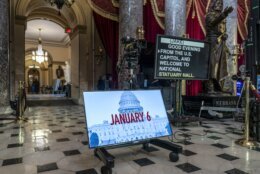 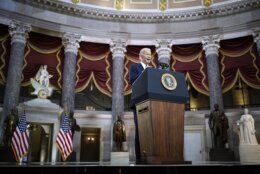 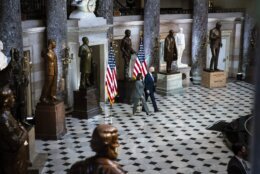 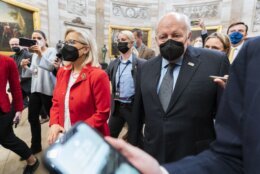 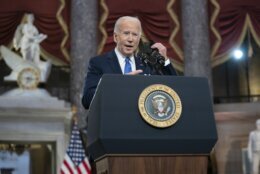 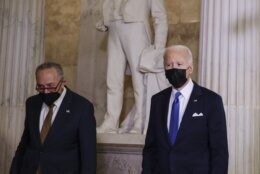 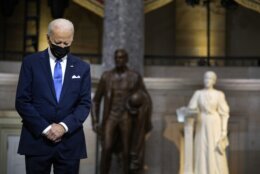 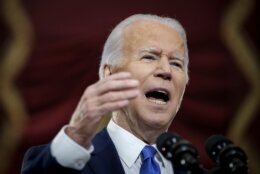 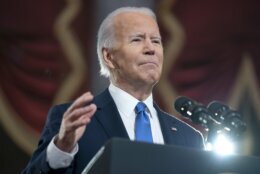 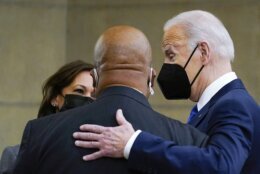 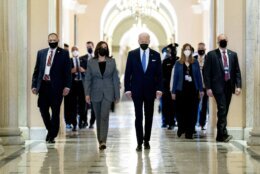 WASHINGTON (AP) — President Joe Biden forcefully blamed Donald Trump and his supporters Thursday for holding a “dagger at the throat of democracy” with election lies that sparked last year’s deadly assault on the U.S. Capitol, using the anniversary of the attack to warn that America’s system of government remains under urgent threat.

The president set the tone on a day of remembrance that brought fiery speeches, moments of silence and anguished accounts from lawmakers recalling the terrifying hours of Jan. 6, 2021, when the Trump mob laid siege to the Capitol and rioters tried to stop the routine, ceremonial certification of election results.

Notably, almost no Republicans joined Biden and the Democrats in what some hoped would be a day of reconciliation. Instead, it was a fresh and jarring display of a nation still deeply torn by the lies that led to the riot, by its unsettled aftermath and Trump’s persisting grip on a large swath of the country.

“For the first time in our history, a president not just lost an election, he tried to prevent the peaceful transfer of power as a violent mob breached the Capitol,” Biden said. “You can’t love your country only when you win.”

Biden’s criticism of the defeated president was rife with condemnation for the assault that has fundamentally changed Congress and the nation, and has raised global concerns about the future of American democracy.

His voice booming at times, reverberating in the ornate Statuary Hall where rioters had laid siege, the president called on Americans to remember what they saw Jan. 6 with their own eyes: the mob attacking police and breaking windows, a Confederate flag inside the Capitol, gallows erected outside amid calls to hang the vice president — all while Trump sat at the White House watching on TV.

“The former president’s supporters are trying to rewrite history,” Biden said, incredulous. “They want you to see Election Day as the day of insurrection and the riot that took place here on January 6 as a true expression of the will of the people. Can you think of a more twisted way to look at this country, to look at America? I cannot.”

Until the anniversary, Biden had mentioned the attack only sparingly but he aggressively weighed in Thursday and coupled his message with a call for voting rights legislation that Democrats have long been urging.

The president’s remarks drew a stark contrast with the false narratives that persist about the Capitol assault, including the continued refusal by many Republicans to affirm that Biden won the 2020 election. Five people died in the Capitol siege and its immediate aftermath.

“We must be absolutely clear about what is true and what is a lie,” Biden said. “The former president of the United States of America has spread a web of lies about the 2020 election.”

Yet even as the president spoke, the vanquished Trump gave no signs of letting go, a show of the division in the country emphasized by the silence and absence of most Republicans to join Biden at the Capitol.

From Florida, Trump revived his unfounded attack on the elections. He accepted no responsibility for sending the thousands of supporters to the Capitol that day when he told them to “fight like hell.” By Thursday evening, he was sending out a fundraising appeal.

Even among congressional Republicans who condemned the attack in the days afterward, few spoke that way now — some joining in Trump’s false portrayals.

“What brazen politicization of January 6 by President Biden,” tweeted Sen. Lindsey Graham of South Carolina, a sometimes Trump confidant who had initially said he had abandoned Trump after the riot only to quickly embrace him again.

Senate Republican leader Mitch McConnell — who at the time said Trump was “practically and morally” responsible the attack — issued a statement that highlighted the gravity of that day, but also said some Democrats were trying to exploit it for other purposes. He was absent, with a contingent attending the funeral of former colleague Sen. Johnny Isakson in Georgia.

Rep. Liz Cheney, vice chair of the House committee investigating the attack and one of the few GOP lawmakers attending the Capitol ceremonies, warned that “the threat continues.” Trump, she said, “continues to make the same claims that he knows caused violence on January 6.”

“Unfortunately, too many in my own party are embracing the former president, are looking the other way or minimizing the danger,” she told NBC’s “Today” show. “That’s how democracies die. We simply cannot let that happen.”

She was joined by her father Dick Cheney, the former vice president and now a Republican Party elder. They were the only members of the GOP seen for a moment of silence on the House floor.

Dick Cheney was greeted by several Democrats and said in a statement: “I am deeply disappointed at the failure of many members of my party to recognize the grave nature of the January 6 attacks and the ongoing threat to our nation.”

Throughout Thursday, lawmakers shared their experiences of being trapped in the House or rushed away from the Senate, as the siege raged for hours. Rep. Dan Kildee of Michigan showed a shard of glass from one of the Capitol’s broken windows he carries in his pocket.

“January 6 is not over,” he said, choking up. “The threat, and the lie that fuels that threat, continues to rear its head.” He said: To truly protect our democracy we need truth.”

The House panel investigating the insurrection plans to spend the coming months exploring and revealing what happened with public hearings.

Biden and his administration have come under criticism from some in his party for not adequately explaining how they believe democracy is at risk, or pushing Congress hard enough to pass election and voting rights legislation that is stalled by a Republican filibuster in the Senate.

Barack Obama, the former president, said “nothing is more important” on the anniversary than ensuring the right to vote.

“Our democracy is at greater risk today than it was back then,” Obama said in a statement.

Biden’s address, and that of Vice President Kamala Harris who is leading the administration’s efforts on the voting and elections legislation, appeared as a direct response to critics.

“We must pass voting rights bills,” Harris said in her address. “We cannot sit on the sidelines.”

House Speaker Nancy Pelosi drew on history with a hope that Americans would turn to their “better angels” to resolve differences. Lawmakers held an evening vigil on the Capitol steps.

Other remembrances — or demonstrations — were few around the country.

Biden’s sharp message and the Republicans’ distance from it come as lawmakers are adjusting to the new normal on Capitol Hill — the growing tensions that many worry will result in more violence or, someday, a legitimate election actually being overturned.

A new poll from The Associated Press-NORC Center for Public Affairs Research showed that 3 in 10 Republicans say the attack was not violent. Around two-thirds of Americans described the day as very or extremely violent, including about 9 in 10 Democrats.

The percentage of Americans who blame Trump for the riot has grown slightly over the past year, with 57% saying he bears significant responsibility, up from 50% in the days after the attack.

Trump’s claims of widespread election fraud were rejected by the courts and refuted by his own Justice Department.

An investigation by the AP found fewer than 475 cases of voter fraud among 25.5 million ballots cast in the six battleground states disputed by Trump, a minuscule number in percentage terms.