Bagpipes played as an honor guard carried the flag-draped casket bearing the body of former Louisiana Gov. Edwin Edwards down the steps of Louisiana's towering state Capitol Sunday and loaded it onto a horse-drawn carriage for transport to his funeral site.
Listen now to WTOP News WTOP.com | Alexa | Google Home | WTOP App | 103.5 FM

BATON ROUGE, La. (AP) — Bagpipes played as an honor guard carried the flag-draped casket bearing the body of former Louisiana Gov. Edwin Edwards down the steps of Louisiana’s towering state Capitol Sunday and loaded it onto a horse-drawn carriage for transport to his funeral site.

The four-term former governor, died at his home in Gonzales last Monday at age 93 after placing himself in hospice care following bouts with respiratory illness. His body lay in honor Saturday at the Capitol, where members of the public were allowed to file by.

The Southern University marching band was part of a procession that carried the body from the 34-story Capitol built in the 1930s, on a nearly mile-long route to the Old State Capitol, a 19th Century structure, where a private funeral ceremony for Edwards was held.

Among the speakers was current Gov. John Bel Edwards — no relation to the former governor — who praised Edwards as a consensus builder and deal maker who modernized state government and worked hard to fund education and the state’s charity hospital system.

“As he once said, he was both a realist and a dreamer who often dreamed of a better world — and worked to make it so,” the current governor said of Edwards in prepared remarks released publicly Sunday afternoon.

Edwin Edwards was a dominant figure in Louisiana politics for much of the late 20th century, having served in the state Senate and in Congress before winning the governorship.

He became famous for sharp wit, deadpan one-liners and political skills that propelled him to two terms as governor in the 1970s, one in the ‘80s and another in the early ’90s. He drew praise for leading a push for a new state constitution, bringing Black people into state government and ushering in state prosperity with an overhaul of oil taxes in the 1970s. He was in power during the completion of the Louisiana Superdome and was instrumental in efforts that kept the NFL’s Saints in New Orleans, saved the financially troubled 1984 World’s Fair, brought a casino to New Orleans and, eventually an NBA team.

But he also was frequently touched by accusations of wrongdoing. He was tried and acquitted on corruption charges during his third term. After being all but written off as politically finished following a failed re-election bid in 1987, he was re-elected in 1991 after securing a runoff spot against a former Ku Klux Klan leader.

He was tried and convicted in 2000 for rigging the riverboat casino licensing process. He insisted he did nothing wrong, blaming the conviction on perjured testimony. He served eight years in prison, emerging in 2011 at age 83 to marry for the third time. Bride Trina Grimes Scott was then 32. They had a son together. Edwards had four grown children from his first marriage.

Advocates end settlement talks with US over asylum curbs 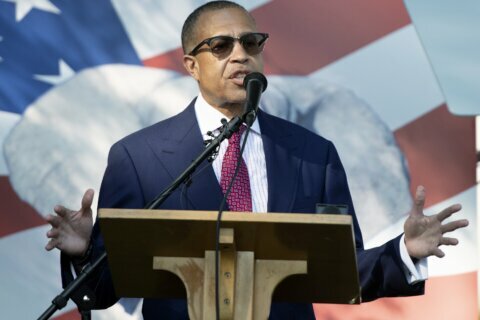