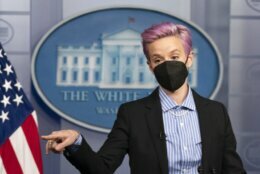 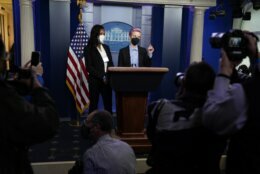 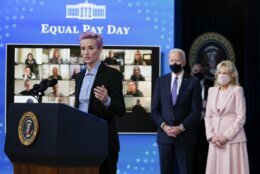 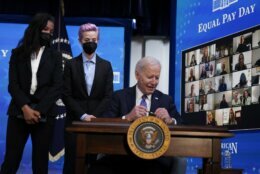 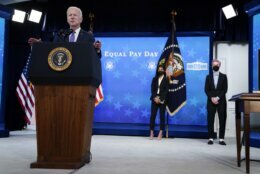 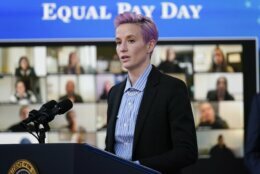 WASHINGTON (AP) — President Joe Biden made the case Wednesday that the pay disparity between men and women has hurt the economy, bringing members of the U.S. women’s national soccer team to the White House to help set new goals for equality.

Wednesday marked “Equal Pay Day” — which is how far into the year women must work on average to make up the pay disparity between what men and women earned the prior year. The Census Bureau estimates that a woman working full-time would earn about 82 cents for each dollar paid to a man.

Biden and his wife, Jill, hosted a roundtable with Margaret Purce and Megan Rapinoe of the U.S. women’s national soccer team, and other members of the squad who attended virtually. The president then signed a proclamation honoring the day.

“Doesn’t matter if you’re an electrician, an accountant or part of the best damn soccer team in the world,” Biden said. “The pay gap is real. And this team is living proof that you can be the very best at what you do and still have to fight for equal pay.”

The women’s team has won the World Cup four times, most recently in 2019. But it sued the U.S. Soccer Federation that same year over wage discrimination. The suit was dismissed in May because the women had accepted a different base pay structure than the men’s soccer team. The women’s team plans to appeal the dismissal.

“Despite those wins. I’ve been devalued, I’ve been disrespected and dismissed because I’m a woman,” Rapinoe said Wednesday with the president. “And I’ve been told that I don’t deserve any more than less, because I am a woman.”

The pay gap impacts the entire economy in ways that exacerbate other problems, including racial inequality. The National Women’s Law Center found that Black women earn just 63 cents for a dollar paid to a non-Hispanic white man, while Hispanic women make only 55 cents. That difference translates into a loss of roughly $1 million in income over a lifetime.

“These aren’t simply women’s issues,” Cecilia Rouse, chair of the White House Council of Economic Advisers, said at Wednesday’s press briefing. “They affect all families, the ability of our economy to recover, and our nation’s competitiveness.”

The Biden administration is pushing several policies to help narrow the gap. It backs the Paycheck Fairness Protection Act, which would enhance a 1963 law by improving employer’s transparency on wages, require employers to show that any discrepancies are because of job qualifications and prevent employers from retaliating against workers who express concerns about pay disparities.

The administration also supports paid family leave and greater access to child care. A February research paper from the San Francisco Federal Reserve found that the pandemic caused mothers to disproportionately leave the job market, as many lacked in-class school and child care options. The paper noted that a flexible work schedule would likely make life easier for mothers with jobs.