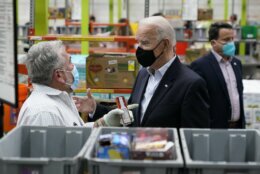 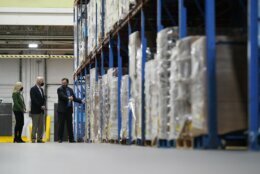 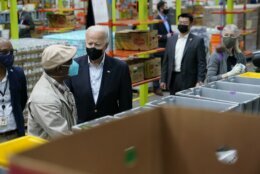 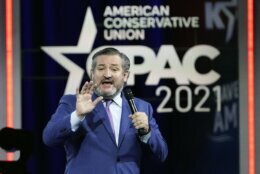 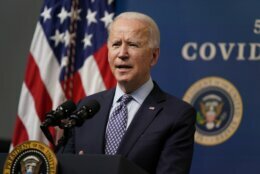 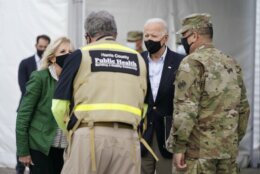 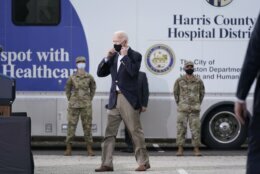 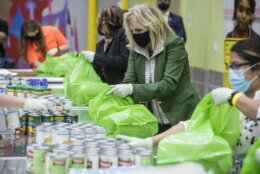 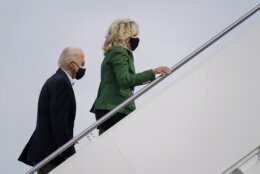 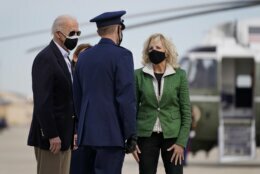 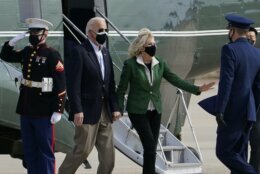 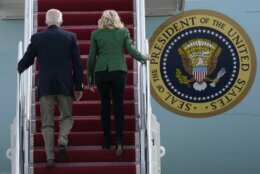 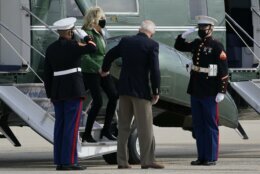 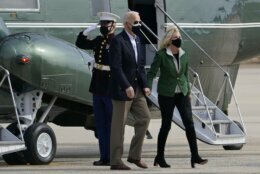 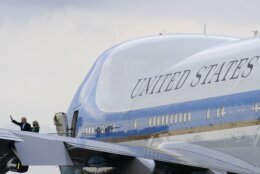 HOUSTON (AP) — President Joe Biden heard firsthand from Texans clobbered by this month’s brutal winter weather on Friday and pledged to stick with them “for the long haul” as he made his first trip to a major disaster area since he took office.

Biden was briefed by emergency officials and thanked workers for doing “God’s work.” He promised the federal government will be there for Texans as they try to recover, not just from the historic storm but also the public health and economic crisis caused by the coronavirus pandemic.

“When a crisis hits our states, like the one that hit Texas, it’s not a Republican or Democrat that’s hurting,” Biden said. “It’s our fellow Americans that are hurting and it’s our job to help everyone in need.”

With tens of thousands of Houston area residents without safe water, local officials told Biden that many are still struggling. While he was briefed, first lady Jill Biden joined an assembly line of volunteers packing boxes of quick oats, juice, and other food at the Houston Food Bank, where he arrived later.

At least 40 people in Texas died as a result of the storm and, although the weather has returned to more normal temperatures, more than 1 million residents are still under orders to boil water before drinking it.

“The president has made very clear to us that in crises like this, it is our duty to organize prompt and competent federal support to American citizens, and we have to ensure that bureaucracy and politics do not stand in the way,” said Homeland Security Adviser Liz Sherwood-Randall, who accompanied Biden to Houston.

Biden was joined for much of his visit by Gov. Greg Abbott and Sen. John Cornyn, both Republicans, four Democratic Houston-area members of Congress and Houston Mayor Sylvester Turner and Harris County Judge Lina Hidalgo.

The president also stopped by a mass coronavirus vaccination center at NRG Stadium that is run by the federal government. Biden on Thursday commemorated the 50 millionth COVID-19 vaccination since he took office, halfway toward his goal of 100 million shots by his 100th day in office. That celebration followed a moment of silence to mark the passage earlier this week of 500,000 U.S. deaths blamed on the disease.

Democrat Biden suggested that he and Republicans Abbott and Cornyn could find common cause in getting Americans vaccinated as quickly as possible.

“We disagree on plenty of things,” Biden said. “There’s nothing wrong with that, but there are plenty of things we can work on together. And one of them is represented right here today, the effort to speed up vaccinations.”

Texas’ other U.S. senator, Ted Cruz, an ally of former President Donald Trump and one of a handful of GOP lawmakers who had objected to Congress certifying Biden’s victory, was in Florida Friday addressing the Conservative Political Action Conference.

Cruz, who has been criticized for taking his family to Cancun, Mexico, while millions of Texans shivered in unheated homes, later said the trip was a mistake, but he made light of the controversy on Friday. “Orlando is awesome,” he said to laughs and hoots. “It’s not as nice as Cancun. But’s nice.”

At the peak of the storm, more than 1.4 million residents were without power and 3.5 million were under boil-water notices in Houston’s Harris County, the nation’s third largest county.

Post-storm debate in Texas has centered on the state maintaining its own electrical grid and its lack of better storm preparation, including weatherization of key infrastructure. Some state officials initially blamed the blackouts on renewable energy even though Texas relies heavily on oil and gas.

In Washington, Biden’s climate adviser said the deadly winter storm was a “wake-up call” for the United States to build energy systems that can withstand extreme weather linked to climate change.

“We need systems of energy that are reliable and resilient,” Gina McCarthy said in an interview with The Associated Press.

The White House said Biden’s purpose in visiting was to support, not scold.

Biden was bent on asking Texans “what do you need, how can I help you more,” White House press secretary Jen Psaki said. “And what can we get more for you from the federal government.”

Galveston County Judge Mark Henry said in an interview that he didn’t know what more the federal government could do to help because the failures were at the state level. But Henry, a Republican who is the highest county official in the suburban Houston county, said that if Biden “thinks it’s important to visit, then come on down.”

Biden wanted to make the trip last week, but said at the time that he held back because he didn’t want his presence and entourage to detract from the recovery effort.

Houston also was the destination for Trump’s first presidential visit to a disaster area in 2017 after Hurricane Harvey caused catastrophic flooding that August.