Cantlay and Schauffele closed with an even-par-72 in late afternoon showers in the alternate-shot final round to finish at 29-under 259 at breezy TPC Louisiana, two shots ahead of Burns and Horschel.

The Ryder Cup and Presidents Cup partners broke the tournament record of 27 under set by Kevin Kisner-Scott Brown and Jonas Blixt-Cameron Smith in 2017, the first year the event was as a team event. Cantlay and Schauffele are the first wire-to-wire winners since the tournament adopted the team format.

“It was a great week,” Cantlay said. “Second time we’ve played this event and we were looking forward to it since last year. We really always enjoy being with each other, both on and off the golf course, and we both played exceptional this week and had a great time doing it.”

Cantlay and Schauffele opened with a record 59 in best-ball play Thursday, shot 68 on Friday in alternate shot and had a 60 in best ball Saturday to shatter the tournament 54-hole record and open a five-shot lead.

Burns, the local favorite who played at LSU, and Horschel closed with a 68. Doc Redman and Sam Ryder were third at 24 under after a 67.

“Sort of sucks like that once in a while when you feel good and you’re trying to chase down some leaders but sometimes you just can’t make it happen, and that’s what it was for us on the last six holes,” Horschel said.

Cantlay, the defending FedExCup champion and PGA Tour Player of the Year, won his seventh tour title and first since the Tour Championship in September. He won a week after losing a playoff to Jordan Spieth in the RBC Heritage.

Schauffele won for the fifth time. He last won at the 2019 Sentry Tournament of Champions.

Cantlay and Schauffele eagled the par-5 seventh, with Cantlay hitting a 254-yard second shot to set up Schauffele a 7-foot putt.

“(Cantlay) hit an unbelievable shot into seven,” Schauffele said. “It was a pretty thing to see from my angle in the fairway. It jump-started the round.”

After missing a 3-foot birdie putt on the short par-4 eighth, Schauffele missed the greens on the ninth and 10th holes, leading to consecutive bogeys and the five-shot lead was down to one over the charging Burns and Horschel.

“I feel like those bogeys were pretty much my fault, put (Cantlay) in bad spots with an 8-iron and wedge in hand,” Schauffele said. “We weren’t really too worried about where everyone else was at, just trying to focus on what we do best.”

Cantlay and Schauffele rebounded with a 3-foot birdie putt on the 11th and followed with six consecutive birdies before bogeying the par-5 closing hole.

Burns and Horschel pulled within one after birdieing Nos. 8, 10 and 11. But Burns’ tee shot on the short par-4 16th found the water and a bogey on the par-3 17th left them three behind.

Masters champion Scottie Scheffler and Ryan Palmer shot a 71 to tie for 18th at 18 under. 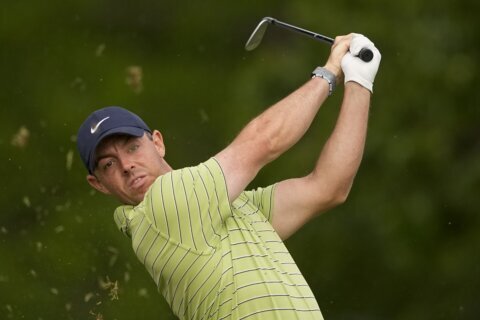