NASSAU, Bahamas (AP) — The value of one shot was a place in history, another was worth $15 million in the bank. One drive introduced a young Scotsman on the world stage, one fairway metal helped to make a young American a major champion.

All were shots that shaped the year in golf.

What follows is a review based on every club in the bag. And in perpetual honor of Arnold Palmer and his beloved shootout at Bay Hill, this bag isn’t limited to 14 clubs:

Bryson DeChambeau gets attention for cutting off most of the lake on the par-5 sixth hole at Bay Hill, and thrusting both arms in the air like a strongman. The best shot hit with a driver was three weeks later at the WGC-Dell Match Play.

Robert MacIntrye of Scotland came to the 371-yard 18th hole at Austin Country Club needing to win the hole to advance out of group play. He hit a bullet onto the green 3 feet from the cup, right next to the feet of Dustin Johnson’s caddie.

Daniel Berger was tied for the lead on the par-5 18th of the AT&T Pebble Beach Pro-Am when he laced a 3-wood onto the green to 30 feet. He holed the eagle putt for a two-shot victory and was on his way. By the end of his year, Berger was a Ryder Cup player.

Nelly Korda won her first major and moved to No. 1 in the world with a powerful performance in the KPMG Women’s PGA Championship. And that power was never more evident than on the par-5 fifth hole at Atlanta Athletic Club. She hit 7-wood that stopped a foot away for eagle that gave Korda the lead for good.

Harris English was one shot behind on the downhill, par-5 closing hole at Kapalua in the season-opening Sentry Tournament of Champions. From a downhill lie, he hit 3-iron from 268 yards to 10 feet. That set up his birdie to tie Joaquin Niemann, and English beat him with a birdie on the first extra hole.

English might be the best reminder that the best way to raise one’s profile is by winning. He won twice this year and was part of his first Ryder Cup team.

Justin Thomas has a short history of big shots on par 5s, and this was a big stage. Thomas and Jordan Spieth were all square against Viktor Hovland and Bernd Wiesberger in Saturday foursomes at the Ryder Cup. On the 569-yard 16th hole, Thomas hit 4-iron to 8 feet that Spieth converted for eagle, and they went on to a 2-up victory.

The Masters was wide open on Saturday afternoon when Hideki Matsuyama hit 5-iron that never left the path of the flag on the par-5 15th, landed softly and rolled out to 5 feet for eagle. That gave him the lead for the first time, and it started an eagle-birdie-birdie run that sent him to a four-shot lead and ultimately a green jacket.

Patrick Cantlay had a one-shot lead over Jon Rahm playing the par-5 18th hole at East Lake with no less than $15 million riding on the outcome. From the fairway, he smoked a 6-iron from 218 yards to 12 feet — the closest of anyone all day at the Tour Championship — that set up birdie to become the FedEx Cup champion.

Sam Burns twice failed to convert 54-hole leads in his pursuit of his first PGA Tour victory. His last challenge at the Valspar Championship was the 16th hole. From 186 yards, he had a 6-iron until caddie Travis Perkins felt the wind die and called him off. Burns instead hammered 7-iron to 18 feet for birdie, sending him to his first title.

Collin Morikawa was coming off two birdies and was in the lead at the DP World Tour Championship in Dubai when he found a bunker off the tee. With an 8-iron, he hit a high fade to shape it around the water to 12 feet. That set up a par that kept up his momentum, and he finished off a victory that made him the first American to become the European Tour’s No. 1 player.

Sergio Garcia already had beaten Lee Westwood in the opening session of the Match Play and then faced him in a playoff two days later to try to win the group. On the 161-yard fourth hole, Garcia hit 9-iron just beyond the pin and it trickled back into the cup for an ace. That prompted Westwood to say: “Well, 28 years on tour and I thought I had seen everything. I hadn’t!”

DeChambeau is swinging faster and hitting it farther, and it’s not just the driver. On the par-3 eighth hole at Torrey Pines in the final round of the U.S. Open, he hit pitching wedge from 175 yards, slightly uphill at sea level, that came within inches of falling for a hole-in-one. The tap-in birdie gave him the lead for the first time. Ultimately, he couldn’t hold on.

Max Homa’s hopes of winning at Riviera looked lost when his tee shot on No. 10 in a playoff settled at the base of a tree, while Tony Finau was 7 feet away for birdie. Homa hooded a gap wedge to get some spin, somehow bumped it up the hill to the front of the green and escaped with par to stay in the playoff. He won with a par on the next hole. Along with the incredible shot, this was among the feel-good wins of the year — an LA kid, winning at Riviera, getting the trophy from Tiger Woods. “I don’t know if I can do anything cooler in golf than this,” he said.

The return of Spieth this year also brought back his short-game magic, none more memorable than the opening foursomes session with Thomas at the Ryder Cup. The ball was buried in deep grass on the side of a steep slope left of the par-3 17th. Spieth opened the face of a 52-degree wedge and swung so hard that the ball shot straight up in the air, and his momentum sent him racing down the hill to the edge of Lake Michigan. The ball came down 6 feet away. Thomas missed the par putt. No matter. It was the shot everyone wanted to see that day.

Xander Schauffele had the Tokyo Olympics in mind all summer, and he came to the final hole of Kasumigaseki Country Club with a one-shot lead. He hit into the trees on the right and had no choice but to chip back to the fairway. From 98 yards, he hit sand wedge about 15 feet behind the hole and watched it spin back to 4 feet. He made the par for the gold medal.

Phil Mickelson had a one-shot lead in the final round of the PGA Championship when he put his tee shot in the front bunker on the par-3 fifth hole at Kiawah Island. Always skilled with a lob wedge, he blasted out perfectly and it trickled into the cup for a birdie surprise, widening his lead and sending the 50-year-old into the record book as golf’s oldest major champion.

The clinching birdie putt for Jon Rahm in the U.S. Open was the 18-footer on the final hole at Torrey Pines. The winning putt? That might have been on the hole before. Rahm was one shot behind Louis Oosthuizen when he rolled in a sharp-breaking 25-foot birdie putt to tie for the lead. Behind him, Oosthuizen bogeyed the 17th and Rahm was on his way.

The story has been corrected to show that Korda made eagle on the fifth hole, not third, and Thomas’ 4-iron led to eagle, not birdie, for Spieth. 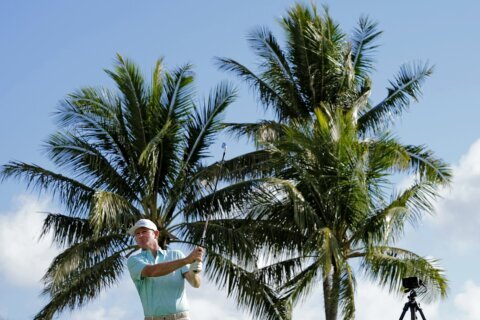 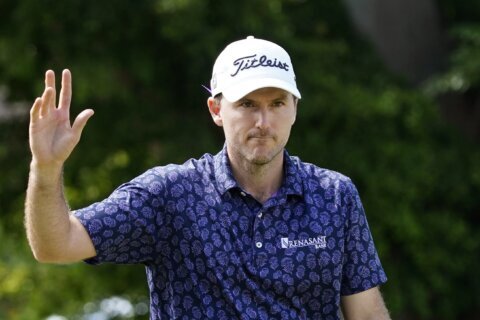 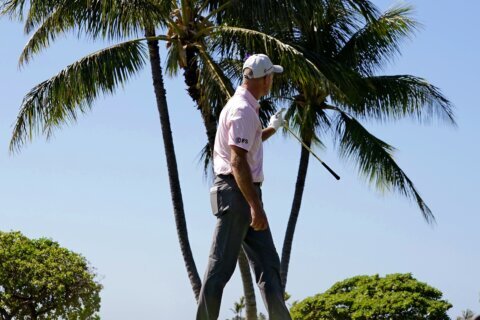