Rory McIlroy found his energy level low amid the busy schedule and stifling summer heat. A good night of sleep and posting his lowest start in nearly a year at the BMW Championship on Thursday seemed to do the trick.
Listen now to WTOP News WTOP.com | Alexa | Google Home | WTOP App | 103.5 FM

OWINGS MILLS, Md. (AP) — Rory McIlroy found his energy level low amid the busy schedule and stifling summer heat. A good night of sleep and posting his lowest start in nearly a year at the BMW Championship on Thursday seemed to do the trick.

McIlroy holed an eagle putt from just outside 10 feet on the par-5 16th at Caves Valley on his way to an 8-under 64, giving him a share of the lead with Jon Rahm and Sam Burns.

Three days after heaving his 3-wood over the fence on his final hole at Liberty National, McIlroy used his new club — an old 3-wood he found in his garage — to smash a 285-yard shot up the hill and over a bunker that set up his eagle putt to move into a share of the lead.

McIlroy hasn’t opened with a score this low since a 64 at the Tour Championship last year, and that’s where he’s trying to return. He is No. 28 in the FedEx Cup, and only the top 30 after the BMW Championship make it to East Lake.

“I’ve went through playoff stretches before where you’re always in that lead group. You’re either 1, 2 or 3 in the FedEx Cup, and that can sort of take its mental toll,” he said. “I’m in a position where I need to play well just to play next week. There is an element of free-wheeling.”

As for Rahm, he is rested and relentless as ever.

The U.S. Open champion and world No. 1 had five birdies on the front and kept bogeys off his card for a 64. It was the 15th time in his last 17 rounds dating to Sunday at the PGA Championship that he shot in the 60s.

Rahm is coming off a third-place finish in the FedEx Cup playoffs opener last week at Liberty National, losing a two-shot lead on the back nine. That might have bothered him more in the past, except that he was thrilled for Tony Finau, and he’s become a fan of Ted Lasso.

The Spaniard as strong as a bull prefers to be a goldfish.

“Happiest animal in the world is a goldfish. You know why? He’s got a 10-second memory,” Rahm said, reciting a famous line from the Ted Lasso series. “Played great golf last week, just a couple of bad swings down the stretch, and that’s the most important thing to remember.”

Burns also played bogey-free in posting his fourth score of 64 in his last eight rounds. While he’s set for the Tour Championship, a big week at Caves Valley might make him a popular topic for one of the six captain’s picks for the Ryder Cup.

It’s a tough position for several players either trying to get the sixth and final automatic spot on the U.S. team this week, or at least get Captain Steve Stricker’s attention. Burns is among those trying to think only of task at hand, whatever that may be.

“Right now I’m focused on trying to give you the best answer I can, and after that I’ll try to figure out what I want to eat and just continue to do that over and over,” Burns said.

Players were feasting on Caves Valley, just like they did at Liberty National last week, and that was to be expected. The course was soft from the rain Hurricane Henri dropped over the weekend, and players were allowed to lift, clean and place their golf balls in the short grass.

Eighteen players were at 67 or lower, a group that included Sergio Garcia (65), Patrick Cantlay (66) and Finau, Xander Schauffele and Dustin Johnson (67).

Is there anything to stop the best in the world?

“Not a course that has fairways this wide,” Cantlay said.

Finau won The Northern Trust last week in a playoff after he and Cameron Smith finished at 20-under 264. That looks to be what it will take at Caves Valley in these conditions.

It was hot, dry and fast at Olympia Fields south of Chicago last year in the BMW Championship. Rahm won a playoff over Dustin Johnson at 4-under 276. Only three other players broke par. Such is the nature of an outdoor sport dependent on weather.

Cantlay couldn’t be stopped once he saw a 15-foot putt drop for par on the ninth hole. He ripped off six birdies over his next seven holes, all but two of them from 18 feet or longer.

The heat and humidity could sap energy from anyone, and McIlroy has been feeling fatigued as much from his schedule.

He went from the British Open to Tokyo for the Olympics — the heat index topped 100 degrees just about every day — and then to that cooler climate of Memphis, Tennessee in early August. After a week off, he faced as many as three straight FedEx Cup playoff events.

“I was super tired yesterday. But you get a good night’s sleep and you feel a little bit better the next day and you can go out and play well,” McIlroy said. 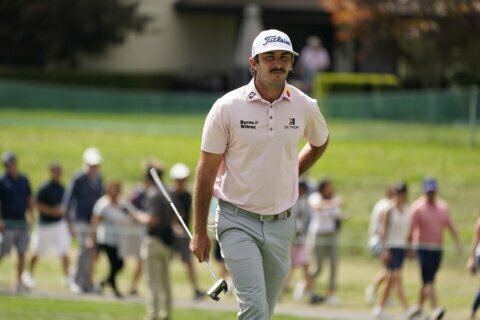