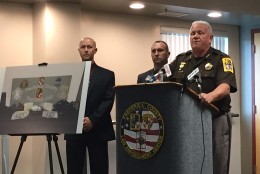 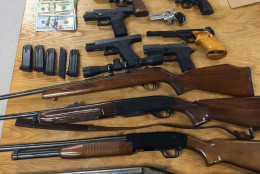 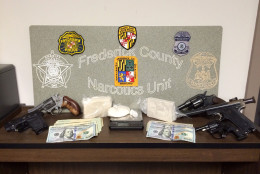 FREDERICK, Md. – Eight people were indicted Friday in what Frederick County’s sheriff is calling the largest heroin bust in the county’s history.

“It’s an enormous amount of heroin,” Frederick County Sheriff Chuck Jenkins said. “Rarely do you make a seizure like that.”

The investigation dates back to January. Jenkins said investigators noticed similarities in the heroin overdoses, which helped law enforcement uncover a large drug ring. Several people were arrested after they were caught with more than 510 grams of heroin.

“This would have impacted hundreds of residents in the county,” Frederick County Sheriff’s Lt. Jason West said. “The street value is approximately $75,000, so this had a major impact on Frederick County.”

Police also seized more than $4,500 in cash; 18 guns; four cars; smaller amounts of powder cocaine, crack cocaine, marijuana and THC wax; and about 400 pills. About half of those pills were the painkiller Oxycodone, though the haul also included alprazolam (better known by its brand name, Xanax), Adderall, methadone and Ambien.

A ninth person, Lauren Gardner, 32, was indicted in connection to the investigation in May, police said.

Police said another person, Alexandra Kastner, is wanted in connection to the drug ring.

The Frederick County Sheriff’s Office, Frederick Police Department, Maryland State Police and Homeland Security Investigators worked together to investigate each of the heroin overdoses and shut down the distribution ring.