Holidays: Best holiday plants | DIY holiday villages | Healthy meals you can make in minutes | Gifting on a budget | Send in photos of decorations
Home » Europe News » China's Xi, out of…

Xi will attend the G-20 meeting of industrial and emerging market nations in Indonesia followed by the Asia-Pacific Economic Cooperation summit in Thailand. He will meet individually with other leaders, including U.S. President Joe Biden on Monday in their first in-person talks since Biden took office in January 2021.

The Chinese leader has relied mainly on speeches by video to deliver China’s message at the U.N. and other forums since 2020. The period has seen a sharp deterioration in China’s relations with the West over the COVID-19 pandemic, a crackdown on civil rights in Hong Kong, military threats against Taiwan and Beijing’s tacit support for Russia’s invasion of Ukraine.

More broadly, China and the West are moving farther apart. The U.S. and Europe are looking at China more critically, with Germany blocking investment in its companies, while China’s leaders have shown a determination to go their own route.

Bruce Dickson, a Chinese politics expert at George Washington University, described a “growing fear, concern and anxiety that China doesn’t want to be a partner with other countries. It wants to push its own agenda regardless of the opposition to it.”

More moderate voices in both Beijing and Washington advocating better relations are being pushed to the side. “It’s really an effort of who can come up with the toughest policy to resist China’s efforts,” Dickson said.

After a state visit to neighboring Myanmar in January 2020, Xi stayed in mainland China for more than two years.

He emerged first on a brief visit to Hong Kong for the 25th anniversary of its return from British rule on July 1 and a short trip to Kazakhstan and Uzbekistan in September for a regional summit.

“The current international situation is overly complex and national leaders need to have an opportunity for discussion,” he said. “Online exchanges are not enough. Meetings among leaders are important and irreplaceable.”

Pakistan Prime Minister Shahbaz Sharif and German Chancellor Olaf Scholz visited Beijing to meet Xi earlier this month. But under China’s “zero-COVID” policy, it remains difficult to travel into China, while domestic travel is restricted wherever a serious outbreak occurs.

Australian Prime Minister Anthony Albanese said Friday that he would ask Xi to lift billions of dollars in trade barriers if they meet, while Biden said earlier this week he plans to discuss growing U.S.-China tensions over trade, the self-ruled island of Taiwan and China’s relationship with Russia.

China has not condemned Russia’s invasion of Ukraine and accused the U.S. and NATO of forcing Russia’s hand. It also fired missiles over Taiwan and appeared to rehearse a military blockade of the island after U.S. House Speaker Nancy Pelosi visited Taiwan in August.

China also cut off talks with the U.S. on a raft of issues following Pelosi’s trip including climate, an area where cooperation between the world’s two largest emitters of greenhouse gases is crucial to efforts being discussed at ongoing U.N. climate talks in Egypt to limit the impact of climate change.

Chinese Foreign Ministry spokesperson Zhao Lijian said Friday that “the U.S. needs to work together with China to properly manage differences, advance mutually beneficial cooperation, avoid misunderstanding and miscalculation and bring China-U.S. relations back to the right track of sound and steady development.”

Xi is making this trip after having consolidated his hold on power in China last month at a major meeting of the long-ruling Communist Party. He was given a third five-year term as leader and the top party bodies were packed with his loyalists, signaling his approach to foreign and domestic policy will continue.

China’s doubling of its defense budget over the past two decades and militarization of islands in the South China Sea have raised questions about its stated policy of a “peaceful rise.” Southeast Asian neighbors have had to tread a thin line between maintaining relations with the U.S. and incurring China’s wrath.

At the APEC meeting in Thailand, Xi will deliver a speech on China’s proposals to deepen Asia-Pacific cooperation and promote regional and global economic growth, Zhao said.

He is also expected to tout his Global Development Initiative, a rebranding of his signature “Belt and Road Initiative,” which has been criticized for saddling poor countries with massive debts and giving China potential control over crucial ports and other infrastructure from Southeast Asia to Europe.

Though Xi has all but eliminated domestic political challenges, he faces rising threats on the economic front.

China’s growth has slumped under the pressure of strict anti-virus campaigns that have disrupted trade, travel and supply chains, along with a crackdown on massive debt in the real estate industry, which has been a driver of growth.

Dickson said the Xi-Biden meeting at the G-20 could help cool tensions. But, he added, “I’ve got to say right now that it’s hard to see any willingness coming from either country to try and stabilize things and keep the downward spiral from continuing.” 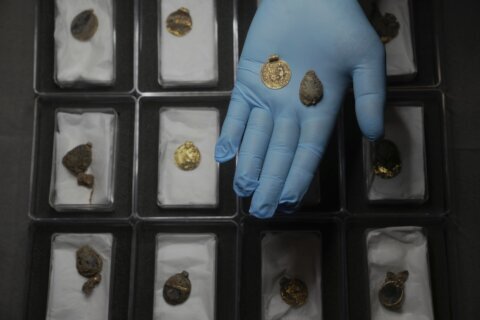