LONDON (AP) — The British government’s plan to give some asylum-seekers a one-way ticket to Rwanda faces a legal challenge in the High Court on Monday, with human rights groups arguing that the policy is both illegal and immoral.

The hearing comes after immigrant rights groups and labor unions filed a barrage of lawsuits that forced Prime Minister Boris Johnson’s government to cancel the first planned deportation flight to Rwanda on June 14. Johnson is set to leave office on Tuesday but his successor Liz Truss, the current foreign secretary, has backed the policy, which is designed to deter would-be asylum-seekers from crossing the English Channel in small boats.

Opponents of the policy argue that it violates international law and won’t prevent migrants from risking their lives in dangerous Channel crossings. They also say the government’s plans are based on the false assumption that Rwanda is a safe destination, even though U.K. government officials have raised concerns about the East African nation’s human rights record.

“Many of those seeking sanctuary in the United Kingdom have suffered unimaginable horrors; it is incomprehensible that our government is now trying to expel them to a country that has a well-documented record of repression,’’ said Yasmine Ahmed, U.K. director of Human Rights Watch. “We are hoping that this case will shine a spotlight on the inaccuracies that the U.K. government has propagated about Rwanda in order to fulfil its migration objectives.’’

The case was brought by several asylum-seekers who were targeted for deportation in June, as well as immigrant rights groups Care4Calais and Detention Action, and the Public and Commercial Services Union, which represents border staff who will have to enforce the policy.

The government in April announced an agreement with Rwanda under which people who enter Britain illegally would be deported to the East African nation, where they would be allowed to seek asylum. In exchange for accepting them, Rwanda would receive millions of pounds (dollars) in development aid.

Johnson has emphatically defended the plan, arguing that it is a legitimate way to protect lives and thwart the criminal gangs that smuggle migrants across the English Channel.

After the first deportation flight was canceled, Home Secretary Priti Patel said the government planned to move ahead with its Rwanda policy and the flights had merely been paused while individual claims were considered.

The government believes the policy is legal, Patel told the House of Commons, adding that Rwanda’s commitment to human rights had been “terribly misrepresented and traduced.”

“Rwanda … is a safe and secure country with an outstanding track record of supporting asylum-seekers,” she said. “And, indeed, we are proud that we are working together.” 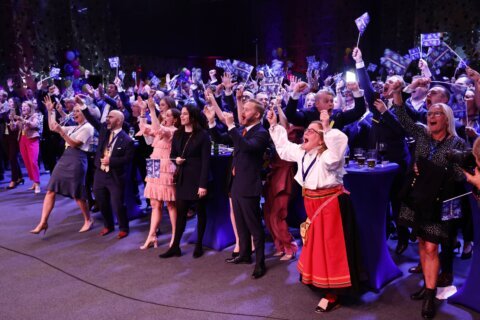