ROME (AP) — If Italy elects the nation’s first female premier, will its women be delighted or dismayed?

Should opinion polls prove on the mark, Giorgia Meloni and the far-right Brothers of Italy party she co-founded less than a decade ago will triumph in the Sept. 25 election. Meloni might then be asked by Italy’s president to try to form a viable coalition government with right-wing allies.

For many female voters, it’s a question of gender versus agenda.

For her supporters, what matters is her conservative, “God, homeland and family” platform, not her sex.

Brothers of Italy has roots in a neo-fascist movement that hailed the legacy of Benito Mussolini, who bestowed prizes on women who had many children. The party took around 4% of votes in the last election, in 2018, but according to some pollsters it could win nearly 25% in this one.

Licia Donati, as a young Communist activist in the 1960s, fought for the legalization of divorce, which came in 1970. She also mobilized so Italian courts would recognize that wives have the same right to justice as husbands in a country where, until 1981, laws sanctioned leniency for men who murdered women to preserve “family honor.”

If Meloni does become Italy’s first female premier, it would be “a rupture (with the past) in the sense she is a woman, but it would be going backward in terms of the conservative women’s culture,” said Donati, 84, a Tuscan native who lives in Rome.

Donati said that if she could speak to the politician, she would say: “What battle did you wage for women, what did you do? Nothing.”

Oria Gargano, whose BeFree organization in Rome helps women who have suffered domestic violence, noted with dismay that a Brothers of Italy politician has pushed for cemeteries where aborted fetuses can be buried, and to post the names of women who aborted even without their permission.

Recently, Meloni angered women by retweeting a video of a woman being raped in a street — “for the simple fact that it was an immigrant who raped her,” Gargano said.

Meloni has derided most of the migrants — overwhelmingly men — who sail toward Italy’s shores on smugglers’ boats as freeloaders who don’t deserve refugee status.

Meloni has generally refrained from pitching for women’s votes simply because she is a woman. But she has snapped back at contentions that it wouldn’t be a victory for women if she becomes premier.

“I challenge anyone to say that that would not mean breaking the glass ceiling,” the Italian news agency ANSA quoted her as saying when she came to the Monza track for a Formula 1 race.

“I am a woman, so saying that you’re not a woman if you say the things I say, frankly, makes me laugh.”

As a young woman, Sen. Emma Bonino, leader of the tiny +Europe party, which is allied in the campaign with Meloni’s rival, Democratic Party chief Enrico Letta, pushed to make divorce and abortion legal.

During this election campaign, Meloni has been pressed to say whether she will uphold Italy’s law legalizing abortion through the first 12 weeks of pregnancy or later if a woman’s health or life is endangered. She insists she’ll respect the law, but wants it implemented in a way to provide help for women who decide to give birth.

Several political rivals have cited a shortage of physicians willing to perform abortions in some parts of Italy, including the Marche region, governed by Meloni’s party. Under the 1978 law, personnel in Italy’s public health system can declare themselves “conscientious objectors” to avoid performing the procedure.

At Meloni’s first campaign rally last month in Ancona, a city in Marche, about 1,000 wildly cheering supporters far outnumbered the couple of dozen protesters, most of them women, on a side street.

“You ooze hate and you don’t represent me,” read one protesting woman’s placard.

Meloni, who has a young child with her male companion, decries what she calls LGBTQ “lobbies,” scoffs at the concept of gender fluidity and supports Italy’s ban on adoption by single people.

“Traditional” families for her are the bedrock of society.

Her conservative views are off-putting to some women, including Alice Riboli, who at 18 can vote for the first time.

“It would be better to see a woman in politics hold a role of that kind (like premier), but perhaps not her. Maybe someone with ideas a little more open, more current,” said Riboli, from Aosta, northern Italy.

But other women back Meloni’s agenda.

Lavinia Mercante, 25, from Rome, said she backs her “as a politician, not as a woman.” Mercante wants to see the political right come to power.

Still others are indifferent to female empowerment as a campaign theme — they just want a government with staying power. Since 2018, Italy has had three different ruling, oft-squabbling coalitions, from across the political spectrum.

“I think I don’t care if the right or the left wins,” said Caterina Bazzani, 52, a financial consultant from Agrate Brianza in northern Italy. “I want a government, voted for by Italians, that will last five years and accomplish its program.”

As for Meloni, “some people say she should get into office because she’s a woman, but I’m not thinking that way. It’s enough for me that she is capable. Man or woman, it’s the same to me.”

Sabrina Sergi contributed to this report. 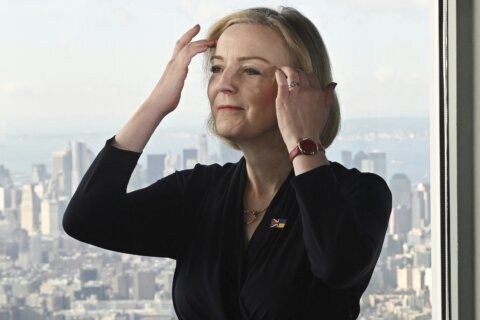