THESSALONIKI, Greece (AP) — Greek authorities say they have located a large group of migrants on an islet on the Greek side of a river that runs along the border with Turkey, which is a major crossing point for people illegally entering Europe.

A police statement Thursday said a search and rescue operation was underway to bring the migrants off the islet in the Evros River. The water level at this time of the year is shallow, which allows for easy crossing on foot at many points.

Police said they launched the operation after Turkish authorities informed them that more than 300 migrants were on the Greek islet.

No information was available on the precise number of the migrants, their nationalities or health condition.

Relations between regional rivals Greece and Turkey are at a low point, and Athens routinely accuses Ankara of encouraging migrants to cross illegally into Greek territory. Turkey in turn accuses Greek authorities of illegally turning back migrants who have made it over to the Greek side, without allowing them to apply for asylum.

Last month, a group of 38 migrants was found on a Greek islet after several days of reports that they were being pushed from one side of the border to the other. 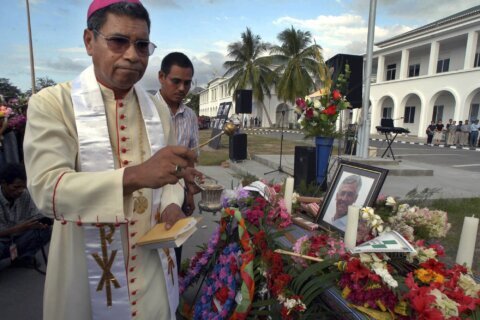