Here’s how the news of Diana's death unfolded in the early hours of Aug. 31, 1997, and the days that followed as told by journalists who covered the story for The Associated Press.
Listen now to WTOP News WTOP.com | Alexa | Google Home | WTOP App | 103.5 FM
(1/5) 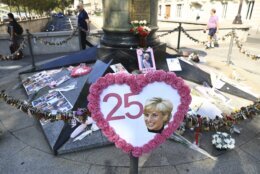 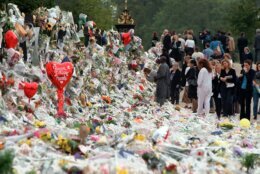 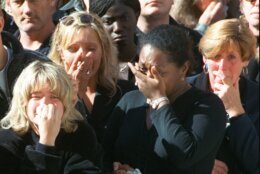 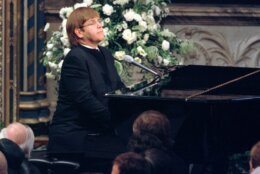 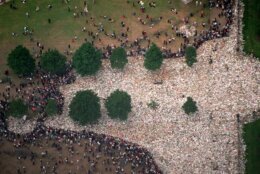 LONDON (AP) — It was a warm Saturday evening and a group of journalists had gathered at a Paris restaurant to enjoy the last weekend of summer. At sometime past midnight, phones around the table began to ring — seemingly all at once — as news desks contacted reporters and photographers to alert them that Princess Diana’s car had crashed in the Pont de l’Alma tunnel.

Here’s how the news of Diana’s death unfolded in the early hours of Aug. 31, 1997, and the days that followed as told by journalists who covered the story for The Associated Press.

“We were paying the bill and all of a sudden there was this cacophony of mobile phones going off. The first one that went off was a British reporter’s, a British cameraman, and he just got up and started running. And the rest of us called out, `What happened?’ And he just said, `The Princess of Wales! Crash!’ And then kept running.”

“The first thought there was oh, maybe one of the boats that go up and down the Seine, the Bateaux Mouches, maybe one of them is called the Princess of Wales and it crashed into the banks of the river. That sounded like a digestible story to imagine. But, of course, soon we realized that Diana had been in a car, in a limousine … the Mercedes had crashed.”

“I got down to the tunnel and it was chaos, absolute chaos. There were late-night revelers and tourists who, of course, were walking at that time of night to go back to their hotels. They were on top of the Pont de l’Alma looking down. They couldn’t see anything because they were on the top of the bridge. … The police were doing what they could to keep people back. Of course, having a press pass, I just jumped into the road, ran into the center of the road … I could very clearly see emergency vehicles and the Mercedes down in the tunnel. So I stood on this intersection and started filming what I could.”

“I parked my motorcycle, and as I parked it, I saw a police van pull out and with windows you could see through. And I saw some colleagues in that police van. My first thought was, ‘Well, if there is a picture to be made, they were there before — they have it. I’m just going to be here to pick up the pieces.’ Well, it turned out they made some pictures, that the rest of their film had been seized and everything. And I started to shoot from afar what was pretty much a car accident, of all things. … I don’t like to call it luck because this was not a very pleasant situation. People got hurt. People died. But they brought a tow truck and a crane to remove the vehicle, at which point I just moved. It was very easy. I mean, there was no real police blockade or anything like that stopping me from doing my work. I guess I was very discreet because I was not carrying 20 cameras around my neck and screaming to the world, ‘Let me go through, I’m a journalist, I have rights, blah, blah, blah.’ I was just making my way slowly to where I was supposed to be to be able to see. And I shot some pictures from the overhead as the car was pulled out of the tunnel on that flatbed truck. And it turns out, I think, over my 30 years at The Associated Press, that might be the worst picture I ever shot, but also the most published picture I ever shot, because, I guess, its historical value.”

“I went to the hospital, Salpetriere, where Diana was taken. And there we were watching as the flowers and the mourners were gathering outside and were waiting for news, waiting to hear something from the hospital, and it seemed like hours and it was hours. And finally they called a press conference before sunrise. And there the anesthesiologist was describing all the medical procedures that they went through to try to revive her. It was sort of painstaking. It took a while. We thought, ‘OK, well, well, is she alive? Is she dead?’ And then finally, after this long description, he said, ‘We were unable to revive her. We declared her deceased at …’ I think it was 4 a.m. And there was this moment of silence, this sort of pause. The way I felt was: Princesses don’t die this way anyway, do they? … And then everybody was scrambling for their phones. But that sort of moment of denial was quite moving, actually. Moving.”

“My first memory is that it felt like the sky had fallen on us. As a journalist, you kind of think of all the events that could happen. Diana was not on the list because she was an icon for everybody, and icons don’t die. When the phone rang after midnight and I was told the news, I remained bewildered. I thought: ‘It’s not possible, it cannot happen. It’s impossible, someone is playing a joke on me.’”

After Diana’s death, the story shifted to London, where members of the public gathered outside her home to mourn the loss of a young woman they had watched grow from a shy teenager into a glamorous princess who championed causes ranging from AIDS treatment to land mine removal.

“I remember walking through Kensington Gardens and seeing all these flowers and drawings. I remember one vividly from Moomina from the Maldives that stuck out to me, and they were all just talking about how important Diana was in their life and in the way that they saw the world in her work on AIDS, her work with charities, and simply her status as a woman who had persevered and endured. … The thing I remember the most was that people who wouldn’t normally have been affected by this type of thing told me that they were deeply affected. And the whole people’s princess notion and (former Prime Minister) Tony Blair speaking about her and all of that, it all came together to form this — the word surreal is overused — but I think that it was a surreal few days where you felt like you were sort of caught up in something and carried along on a wave. And your job was to watch and chronicle and try to understand. But you knew that it was bigger than any one person around you.”

“I do remember being out on the streets around Westminster and a bit further away and just the sheer numbers of people that had come. There seemed to be very little traffic and just people of all colors and backgrounds … and carrying these heaps and heaps of flowers. And it was almost unreal. There was a sort of silence in the center of London. And it went on for a number of days.”

“It just shows you the impact that one person could have and she did it from 1981 until 1997. Hard to imagine she died at age 36. And I think also going back to Westminster Abbey, how could we ever forget Elton John playing and singing “Goodbye, English Rose”? It was a moment that I think united the country and the world. Here I am at age 82. I think it’s hard to imagine that could have happened with anyone else (other) than Princess Diana … It’s a lesson for us to watch in the future. There are others who will come to the fore of the public and it will have impact, but hard to imagine it will rise to the level of the life of Princess Diana.” 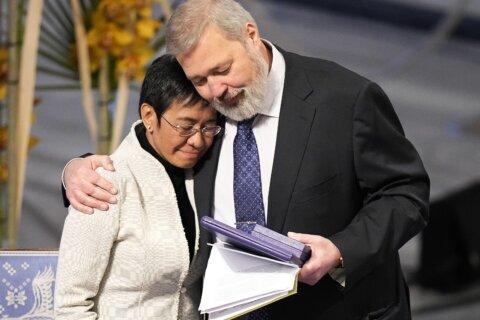