LONDON (AP) — Heathrow Airport in London said Thursday that its limit on the number of passengers is easing a travel crunch that has led to flight cancellations and lost luggage as soaring demand for summer trips runs up against pandemic-era staffing shortages.

Britain’s busiest airport has capped the daily number of departing passengers at 100,000 until Sept. 11 and asked airlines to stop selling tickets and cut flights, stirring criticism. The cap has cut down on last-minute flight cancellations and improved baggage delivery and on-time planes, Heathrow said in a statement.

The airport said it has hired 1,300 people and that the number of security screeners is at pre-pandemic levels, allowing 88% of travelers to get through checkpoints within 20 minutes.

“Passengers are seeing better, more reliable journeys since the introduction of the demand cap,” airport CEO John Holland-Kaye said. “This has only been possible because of the collective and determined efforts of airport, airline and wider Team Heathrow teams.”

Soaring numbers of travelers after two years of COVID-19 travel restrictions have overwhelmed airports and airlines, which had laid off thousands of employees during the depths of the pandemic.

Heathrow has been the frequent scene of chaos this summer, with long lines for security and technical glitches with the baggage system that resulted in huge piles of lost and unclaimed luggage. Amsterdam’s Schiphol Airport also has been hard hit and has imposed a passenger cap.

The CEO of Ryanair, a budget carrier that flies out of other London airports, accused Heathrow of “mismanagement” in an interview with the BBC published Thursday. Michael O’Leary said he had he had “very little sympathy” for airports because they knew the schedules months ahead of time and security staffers don’t need as much training as pilots.

Heathrow said building up airline ground crews that service planes is key to easing the passenger cap and that it has launched a review with that goal.

It added that more than 6 million passengers traveled through Heathrow last month and 16 million are expected between July and September. 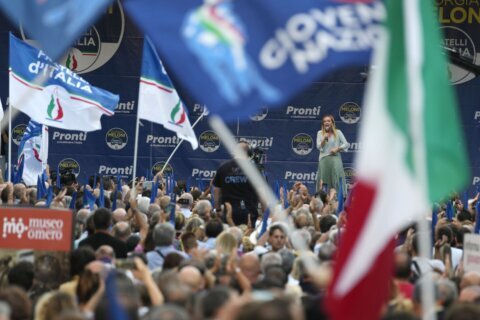 EXPLAINER: How a party of neo-fascist roots won big in Italy