VIENNA (AP) — The head of the United Nations nuclear watchdog urged Iran on Monday to cooperate with his inspectors amid a standoff over its atomic program and a threat by Western nations to censure Tehran over its noncooperation.

“We have to recognize that we have not been able to get the results we were expecting,” Rafael Mariano Grossi, the director-general of the International Atomic Energy Agency, told reporters in Vienna.

“This will be a reminder for Iran, and for us, and for everybody, that we really need to get down to work and clarify these issues that have been outstanding for too long,” Grossi added.

Grossi spoke during the first day of the IAEA board of directors meeting in Vienna, which runs until Friday.

The meeting comes at a tense time for the future of the negotiations over Iran’s nuclear program. Iran has limited the IAEA’s monitoring activities for more than a year, and has failed to provide what Grossi called “credible information” about discovered nuclear material at three of Iran’s sites.

Additionally, talks between senior diplomats from Britain, China, France, Germany and Russia to discuss bringing Tehran back into compliance with the 2015 Joint Comprehensive Plan of Action stalled earlier this year. The pact eased sanctions on Iran in return for curbs on its nuclear program.

The United States pulled out of the accord under former President Donald Trump and reimposed sanctions on Iran, prompting Tehran to resume its uranium enrichment.

Grossi said he was neither for nor against a possible vote to censure Iran during this week’s meeting, stressing the importance of continued cooperation with Iran despite recent tensions.

“I believe that it’s in no one’s interest that the cooperation between the agency and Iran diminishes even further,” he said.

Still, without adequate cooperation on Iran’s part, there is an “impasse” between the agency and Iran’s leadership, Grossi said. “These issues will not go away – they are not solved, they are not clarified.”

Grossi repeated his warnings that Iran is nearing the amount of nuclear material necessary to create a bomb, saying Monday they are “very, very close” to acquiring a “significant quantity” of this material.

He said Iran could reach this amount in a matter of weeks. Still, he stressed that having enough material for a bomb and building a bomb are two different things.

As of Feb. 19, the IAEA says Iran’s stockpile of all enriched uranium was nearly 3,200 kilograms (7,055 pounds). Some has been enriched up to 60% purity — a short technical step from weapons-grade levels of 90%. Meanwhile, Iran has stopped the IAEA from accessing its surveillance camera footage.

While Iran insists its program is peaceful, the IAEA and Western governments say Iran had an organized military nuclear program up until 2003. 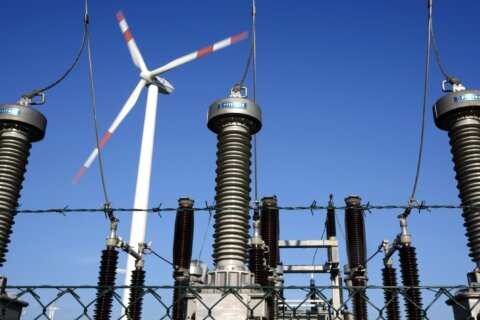