In a televised address following a Cabinet meeting, Erdogan accused neighboring Greece of harboring followers of U.S.-based Muslim cleric Fethullah Gulen, who Turkey says was behind a 2016 failed coup attempt, and of establishing military bases against Turkey. Gulen has long denied the Turkish allegation.

Erdogan then went on to accuse Mitsotakis of recommending to U.S. officials that Washington not sell F-16 fighter jets to Turkey during a recent visit to the United States.

“This year we were supposed to have a strategic council meeting. There’s no longer anyone called Mitsotakis in my book. I will never accept having such a meeting with him because we walk on the same path as politicians who keep their promises, who have character and who are honorable,” Erdogan said.

Erdogan was apparently referring to a speech Mitsotakis delivered in Washington on May 17, when he told Congress that the U.S. should avoid creating a new source of instability on NATO’s southeastern flank.

“The last thing that NATO needs at a time when our focus is on helping Ukraine defeat Russia’s aggression is another source of instability on NATO’s southeastern flank,” the Greek leader said. “And I ask you take this into account when you make defense procurement decisions concerning the eastern Mediterranean.”

Responding to Erdogan’s comments Monday, Greek government spokesman Yiannis Economou said Athens “will not get into a confrontation of statements with Turkey’s leadership.”

“Greek foreign policy is strongly founded on history, international law and our alliances, however much that may annoy some,” he said.

Greece and Turkey are NATO allies but have strained relations over a slew of issues including competing maritime boundary claims that affect energy exploration rights in the eastern Mediterranean. Tensions flared in 2020 over exploratory drilling rights in areas in the Mediterranean Sea where Greece and Cyprus claim their own exclusive economic zone, leading to a naval standoff.

Turkey also claims Greece is violating international agreements by militarizing islands in the Aegean Sea. Athens says it needs to defend the islands — many of which lie close to Turkey’s coast — against a potential attack using Turkey’s large fleet of military landing craft.

Officials from both countries resumed exploratory talks in 2021 after a five-year pause to lay the groundwork for formal negotiations to begin, but haven’t made much progress.

Greece this month formally extended its bilateral military agreement with the United States for five years, replacing an annual review of the deal that grants the U.S. military access to three bases in mainland Greece as well as the American naval presence on the island of Crete.

Erdogan also reiterated that Turkey made a mistake by re-accepting Greece into NATO’s military wing in 1980.

The Turkish leader has also recently lashed out at Sweden’s and Finland’s requests to join NATO, saying Turkey would not support that. 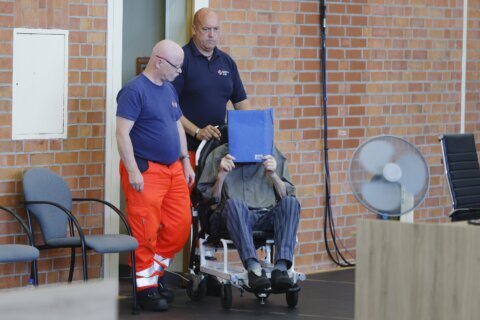