LONDON (AP) — An investigative report released Wednesday blamed British Prime Minister Boris Johnson and other senior leaders for allowing boozy government parties that broke the U.K.’s COVID-19 lockdown rules, and while Johnson said he took “full responsibility” for the breaches, he insisted he would not resign.

Revelations that Johnson and his staff repeatedly flouted restrictions they imposed on Britain in 2020 and 2021 have fueled outrage in the country and led to calls from opponents for Johnson to step down over the scandal known as “partygate.”

Most lawmakers in Johnson’s governing Conservative Party have stood by him for now, and it’s not yet clear if senior civil servant Sue Gray’s report will change that, despite its detailed descriptions of alcohol-fueled bashes in the building where the prime minister both lives and works.

Gray investigated 16 gatherings attended by Johnson and his staff while U.K. residents were barred from socializing, or even from visiting sick and dying relatives, because of coronavirus restrictions.

Gray’s report concluded that the “senior leadership team … must bear responsibility” for a rule-breaking culture. She said there had been “failures of leadership and judgment” in the prime minister’s 10 Downing St. office.

“Those in the most junior positions attended gatherings at which their seniors were present, or indeed organized,” she said.

A separate police investigation resulted in fines for 83 people —including Johnson — making him the first British prime minister found to have broken the law while in office.

Speaking to lawmakers after the report was published, Johnson said he took “full responsibility for everything that took place” and was sorry — but denied he knowingly break any rules. He said he was “humbled” and had “learned a lesson” but it was now time to “move on” and focus on Britain’s battered economy and the war in Ukraine.

Critics, some of them in the Conservative Party, have said Johnson lied to Parliament about the events. Ministers who knowingly mislead Parliament are expected to resign.

Johnson denied lying. He insisted that when he told Parliament last year no rules were broken and there were no parties, “it was what I believed to be true.”

Johnson attended several events mentioned in Gray’s report, including a June 2020 birthday party for which he was fined 50 pounds ($63). He told a news conference: “I believed that they were work events.”

British media and opposition politicians have found that hard to square with staff members’ accounts of “bring-your-own-booze” parties and regular “wine time Fridays” in the Downing Street office amid the pandemic.

Keir Starmer, the leader of the opposition Labour Party, said Gray’s report was a “catalogue of criminality” and that Johnson’s government had “treated the sacrifices of the British people with utter contempt.”

Gray’s mandate did not allow her to mete out punishment. Much of her 37-page report is devoted to a detailed account of the events, including a May 2020 party in the Downing Street garden to which “the Prime Minister brought cheese and wine from his flat” and a party the next month at which “one individual was sick” and “there was a minor altercation between two other individuals.”

At another party held the night before the funeral of Queen Elizabeth II’s husband, Prince Philip, revelers in the garden broke a swing belonging to Johnson’s toddler son Wilf and partied until 4 a.m.

The report includes emails and WhatsApp messages suggesting that staff members knew they were breaking the rules. One invitation was changed from “Wine and Cheese Evening” to “End of Year Meeting with Wine & Cheese.” On another occasion, a staffer warned that journalists would be in the building for a news conference and people should avoid “walking around waving bottles of wine.”

In measured civil service language, Gray slammed the behavior of those involved. She said there were “multiple examples of a lack of respect and poor treatment of security and cleaning staff,” branding that “unacceptable.”

“Many will be dismayed that behavior of this kind took place on this scale at the heart of government,” Gray wrote. “The public have a right to expect the very highest standards of behavior in such places and clearly what happened fell well short of this.”

Johnson has clung to power despite the scandal, partly because Russia’s invasion of Ukraine has diverted public and political attention. Some Conservatives argue would be rash to push Johnson out now, whatever his flaws.

Conservatives also have tried to rebuff criticism by pointing out that Labour’s Starmer also faces a police investigation for having a beer and a takeout curry with colleagues in April 2021. He insists the meal was part of a working day and broke no rules but has said he will resign if fined by police.

Now that Gray and the police have finished their investigations, Johnson’s fate is in the hands of the Conservative Party, which has a history of throwing out leaders who become liabilities. Tory lawmakers say they have received angry messages from voters, and many are uncomfortable defending serial rule-breaking.

Johnson faces an inquiry by a House of Commons standards committee over whether he lied to Parliament. And Gray’s conclusions could revive calls from Conservative lawmakers for a no-confidence vote in the leader who won them a big parliamentary majority in 2019. Under party rules, such a vote is triggered if 15% of party lawmakers — currently 54 — write letters calling for one.

If Johnson lost such a vote, he would be replaced as Conservative leader and prime minister. It’s unclear how many letters have been submitted so far, though one more was submitted Wednesday. Conservative lawmaker Julian Sturdy said, “I am now unable to give the Prime Minister the benefit of the doubt and feel it is now in the public interest for him to resign.”

Johnson got a warm reception from Tory lawmakers at a private meeting in Parliament Wednesday evening. Attendees described him as solemn and conciliatory.

“He fully gets the mood,” said legislator Jonathan Gullis.

But another Conservative, Tobias Ellwood, said in the House of Commons that Johnson had lost his support.

“A question I humbly put to my colleagues is, ‘are you willing day in and day out to defend this behavior publicly?’” he said. 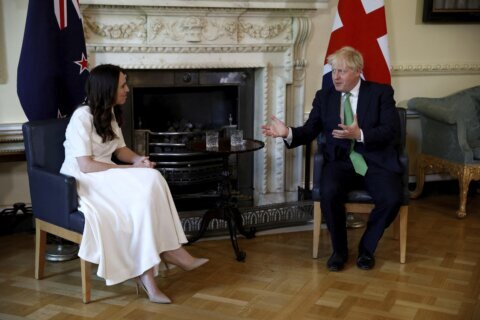