COPENHAGEN, Denmark (AP) — Historically skeptical about European Union efforts to deepen cooperation, Danish voters on Wednesday will choose whether to abandon the country’s decision three decades ago to opt out of the bloc’s common defense policy.

The Danish referendum comes as the latest example of European countries seeking closer defense links with allies in response to Russia’s invasion of Ukraine. It follows Sweden and Finland’s historic bids to join NATO — something to be taken up at a summit next month.

Denmark joining the EU defense policy would have a relatively modest impact on Europe’s security architecture, particularly compared to Sweden and Finland joining NATO. But Christine Nissen, a researcher with the Danish Institute for International Studies, said both moves are “part of the same story,” and would strengthen military cooperation on a continent stunned by the war in Ukraine.

She said the main effect of abandoning the opt-out decision would be that Danish officials could stay in the room when EU colleagues discuss defense topics and Danish forces could take part in the bloc’s military operations.

Denmark, a founding member of NATO, has stayed on the sidelines of EU efforts to build a common security and defense policy in parallel with the trans-Atlantic alliance. It was one of four opt-out moves that Danes insisted on before adopting the EU’s Maastricht Treaty, which laid the foundation for political and economic union.

The 1992 waiver means Denmark hasn’t participated in the EU’s discussions on defense policy, its development and acquisition of military capabilities and its joint military operations, such as those in Africa and Bosnia and Herzegovina.

The Danes also opted out of EU cooperation on justice and home affairs, the common currency and citizenship. The opt-out decision on citizenship, which said European citizenship wouldn’t replace national citizenship, has since become irrelevant as other members later adopted the same position. But the other provisions remain intact despite efforts by successive governments to overturn them.

In a 2000 referendum, Danish voters decided to stay outside the eurozone, and 15 years later they voted to keep the exemption on justice and home affairs.

This time, however, Danes appear ready to say goodbye to opting out of common defense.

Social Democratic Prime Minister Mette Frederiksen called for the referendum on March 8, less than two weeks after Russia launched its invasion of Ukraine on Feb. 24. She called on citizens to vote “yes” to abolishing the exception, saying to do so “will strengthen our security.”

“I am voting in favor of abolishing the opt-out” decision, said Peter Jakobsen, a 61-year-old pharmacist in Copenhagen. “We must not stand outside. We are in the EU and we must be involved. We must make a difference.”

But Sanne Michelsen, a 52-year-old shopper in Copenhagen, said she didn’t see the point of suddenly joining the EU’s defense policy after years on the outside.

“This is a referendum about an opt-out that has never caused us any problem,” she said in her native Danish, before turning to English to add. “If it ain’t broken, don’t fix it.’”

The “yes” side has had a clear lead in polls, with about 40% in favor of dropping the exemption and 30% against. About a fourth of voters say they are still undecided.

There is widespread support for dropping the defense opt-out decision in Parliament. Only three small parties want to maintain it, two on the right and one on the left.

WHO: Monkeypox cases in Europe have tripled in last 2 weeks 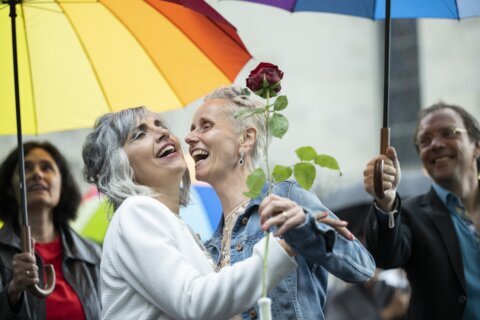