A British court ruled Wednesday that the Conservative government acted illegally when it discharged hospital patients into nursing homes without testing them for COVID-19 or isolating them — a policy that led to thousands of deaths early in the pandemic.
Listen now to WTOP News WTOP.com | Alexa | Google Home | WTOP App | 103.5 FM

LONDON (AP) — A British court ruled Wednesday that the Conservative government acted illegally when it discharged hospital patients into nursing homes without testing them for COVID-19 or isolating them — a policy that led to thousands of deaths early in the pandemic.

Two High Court judges said the policy in March and April 2020 was unlawful because it failed to take into account the infection risk that non-symptomatic carriers of the virus posed to older or vulnerable people.

The judges said U.K. officials did not take into account the “growing awareness” that the virus could be spread by people who had no symptoms, which had been identified as a risk as far back as late January 2020.

They said the U.K. government should have advised that discharged hospital patients be kept separate from other nursing home residents for 14 days — something that didn’t happen in the first weeks of the country’s outbreak.

Around 20,000 people died with the virus in British nursing homes during the initial months of the country’s first outbreak in 2020.

The ruling came in response to a lawsuit by two women whose fathers died when the virus swept through the homes where they lived. Their lawyers said the decision — which allowed COVID-19 to spread among the elderly and vulnerable — was “one of the most egregious and devastating policy failures in the modern era.”

The judges backed some parts of the lawsuit’s arguments but rejected claims made under human rights legislation and against the National Health Service.

British Prime Minister Boris Johnson said the government would study the ruling and respond “in due course.” He said officials had to make difficult decisions at an “incredibly difficult time” when “we didn’t know very much about the disease.”

“The thing we didn’t know in particular was that COVID could be transmitted asymptomatically in the way that it was, and that was something that I wish we had known more about at the time,” Johnson said in the House of Commons.

Like many countries, the U.K. had little capacity to test for coronavirus when the pandemic began, and many asymptomatic patients were quickly released from hospitals back into care homes, where COVID-19 soon ran riot.

The health secretary at the time, Matt Hancock, has said the government did all it could to keep people safe during the biggest public health crisis in decades.

Hancock’s office said in a statement that the court ruling cleared him of wrongdoing and found he “acted reasonably on all counts.” It said Hancock — who quit the government last year for breaching pandemic social-distancing rules by having an affair while living with his wife — wished health officials had told him sooner all they knew about asymptomatic transmission.

Claimant Cathy Gardner, whose father died in April 2020, said “my father and other residents of care homes were neglected and let down by the government.”

“Matt Hancock’s claim that the government threw a protective ring round care homes in the first wave of the pandemic was nothing more than a despicable lie of which he ought to be ashamed and for which he ought to apologize,” Gardner said.

Johnson has set up an independent public inquiry into Britain’s handling of the pandemic, though it has yet to begin. More than 174,000 people have died in Britain after testing positive for the virus, the highest toll in Europe after Russia.

Helen Wildbore, director of the Relatives and Residents Association charity, said the ruling “confirms what people living in care and their families have known all along – the protective ring was non-existent.”

“The ruling is very welcome as a first step to justice but bereaved families will be left asking why more wasn’t done to protect their loved ones and how many lives could have been saved,” she said. 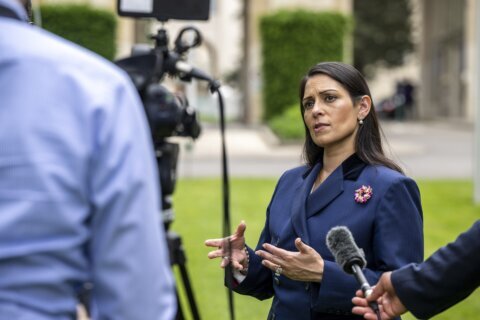