ISTANBUL (AP) — Turkey’s central bank kept interest rates unchanged for a third straight month Thursday as consumer prices surge at an eye-popping pace, coming after a series of rate cuts last year triggered a currency crisis that has made it difficult for people to buy basic goods.

The latest official statistics showed inflation above 54.4%. The bank said in a statement that inflation has been driven by “rising energy costs resulting from the heightened regional conflict,” referring to Russia’s war in Ukraine, and supply side factors affecting food prices.

It said it expects inflation to ease following measures it has taken to boost the economy and a resolution of the conflict.

Other central banks around the world are moving to raise interest rates as inflation reaches the highest levels in decades, including the U.S. Federal Reserve and the Bank of England. The Fed raised its key rate Wednesday to target inflation that hit 7.9% in February, while the Bank of England raised its key rate Thursday for the third time since December to ease inflation that rose to an annual 5.5% in January.

Turkish President Recep Tayyip Erdogan is a self-proclaimed enemy of high interest rates and has pressured the central bank into lowering borrowing costs in his bid to boost growth. He believes high interest rates cause inflation though conventional economic theory says the opposite.

The central bank began lowering rates in September despite high inflation, which was then still below 20%, and continued cuts until December. That set off a currency crisis, exacerbating already high consumer prices due to Turkey’s reliance on imports and eroding people’s purchasing power. The Turkish lira lost some 44% of its value against the dollar in 2021.

The currency hit an all-time low of 18.36 in December, and the government introduced unconventional measures to disrupt its fall instead of raising interest rates. That includes a program encouraging people to keep their savings in lira through guarantees to compensate losses from the decline of the Turkish currency.

Nevertheless, the lira’s gains have slowed, and it was trading at 14.79 against the dollar after the central bank’s decision.

In a speech to his ruling party members Thursday, Erdogan said they would make Turkey one of the top 10 world economies. His economic and social changes and public works projects over the past two decades were aimed at realizing that goal, he said, pointing to Friday’s inauguration of a bridge over the Dardanelles Strait as “one of the most important symbols of our development leap.”

“The fluctuations in the exchange rate, interest rates and inflation are the prices of the transition process we are going through,” Erdogan said.

The central bank has kept the interest rate constant at 14% so far this year. 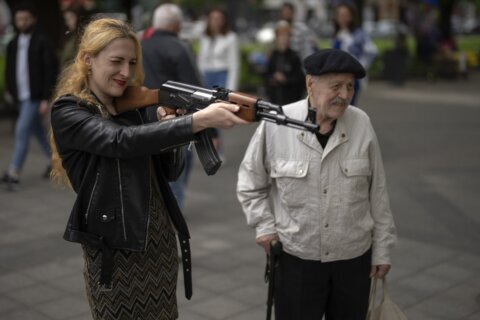