Christine Lagarde said at a Bank of Cyprus conference in the Cypriot capital that at this time, “we don’t have the two elements that characterize” stagflation — a drawn-out recession and inflation that continues to rise.

Lagarde said that although inflation will “no doubt” increase this year because of high fuel and food prices, the bank doesn’t forecast it will keep rising and would eventually decline to “our target of 2%.”

The European Central Bank chief said the conditions remain “quite fluid” because of the disruption caused by Russia’s invasion of Ukraine and that the bank is constantly revising different scenarios about where things could lead.

Lagarde said she’s certain the bank will sift through data earlier than the scheduled June meeting of its governing council to reassess the situation.

“I’m sure that we will be doing that earlier than June because it is actually a fluid situation,” Lagarde said. “We have to be extremely attentive, extremely prudent. We have to monitor data.”

Speaking earlier following talks with Cyprus President Nicos Anastasiades, Lagarde said that in light of the war in Ukraine, the bank is trying to ensure price and financial stability and that sanctions against Russia are strictly implemented.

“We are very keen that the sanctions which have been decided at the European level be also observed and implemented with total integrity and rigor and this is what needs to take place indeed,” Lagarde said. 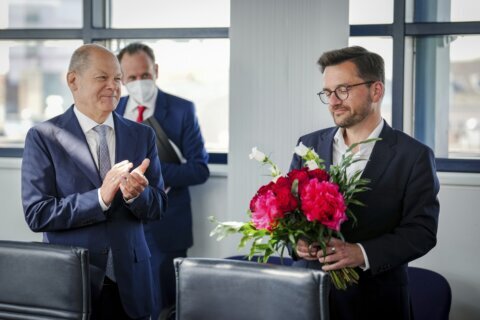