CALAIS, France (AP) — Mohammad and Jaber spend every day looking for the right truck, and this afternoon it feels like it could happen.

This truck seems right. They scream to their friend to jump. He runs, latches on to the moving rig between the cab and the cargo compartment, and squeezes in. The truck doesn’t stop, meaning the driver hasn’t noticed.

The truck and its stowaway then disappear down a French highway toward the English Channel tunnel, the man’s friends hoping he makes it to his destination: Britain.

Mohammad and Jaber are young Sudanese refugees who escaped war in their country, endured kidnappings or beatings in Libya, and crossed the deadly Mediterranean to Italy. They are now in the northern French town of Calais, and like hundreds of other people mostly from East Africa and the Middle East, they are trying to get to Britain by hiding in trucks in what has proved to be a dangerous and potentially lethal method.

Politicians on both sides of the English Channel are arguing about how to make them stop, after thousands of people crossed into Britain by various means in recent months in a flow that has been met with heightened anti-immigrant rhetoric.

While those with some money can pay to go to Britain on flimsy, overcrowded boats in often dangerous waters, the ones who can’t have to jump on one of the tens of thousands of commercial trucks that pass each week between France and Britain.

Many of the migrants in Calais want to reach the UK in search of economic opportunity or because of family and community ties. French authorities say another big draw is lax British rules toward migrants without residency papers.

Only young and fit migrants unencumbered by other family members dare attempt the truck-jumping. It’s a team effort.

On a cold autumn day in Calais last week, five young men crouched by a roundabout at a muddy construction site, watching as trucks emerged from a warehouse. A sixth young man hid close to the road.

When a promising-looking truck came out, the other men screamed at him to jump on.

There’s a code to tell jumpers which one of the exiting trucks they should grab onto.

“We tell them number one, no, number two, no, number three, yes!” Mohammad explained, giving only his first name for fear of arrest or expulsion for trying to cross borders illegally.

The truck drivers check to see that no one enters their rigs, or stop to tell would-be stowaways they they’re not going to Britain and that there’s no point in climbing aboard. Police in patrol cars come by often, too, their sirens blaring, to deter the men.

Once aboard a rig, the jumpers pay close attention to the truck’s route. Only one sequence of left and right turns will lead them to the promised land across the Channel. If the combination is the wrong one, they get off and start over again.

Mohammad twice managed to get on a truck unnoticed but had to jump off when he realized it was not going to the UK.

Some ride in the space between the cab and the cargo. Some climb into the cargo compartment if they can pry the doors open.

And even if the vehicle is going in the right direction, more challenges and danger await the stowaways. Police use technology at the Channel tunnel to scan trucks for body heat and moving shadows. If the stowaways are discovered, they are forced out of the vehicles by police. More than 18,000 were discovered in trucks last year, and 11,000 so far in 2021.

Refugee advocacy groups and human rights observers report receiving calls for help from migrants in refrigerated trucks who say they are suffocating or about to die from hypothermia. Some say they have been roughed up by police when caught.

Some suffer broken bones or worse from trying to jump onto moving trucks. In late September, 20-year-old Yasser Abdallah was crushed to death by a truck.

Abdallah, too, had fled Sudan. He dreamed of being a taxi driver in Britain. The Calais migrant community grieved for him, and a week later, more than 300 came out to march in his memory.

In a written appeal to truck drivers, the marchers asked: “When you notice a refugee in the truck, you shake the truck and brake again and again until we let go. Why can’t we continue our travel?”

The truck jumpers have kept on trying.

At night, they sleep in the forest around Calais, in a tent if they’re lucky, but usually under tree. Police raid the encampments every morning, arresting them, tear-gassing them and confiscating their belongings, according to human rights observers.

“Some people stay one day, some one week, some one month, me, four months and 15 days,” Mohammad said. He and others estimate two to three a day succeed in hopping a truck to Britain.

Ahmad, a 28-year-old, Sudanese truck jumper who left his country in 2018 because of the war, showed a reporter a TikTok video dated one day after Yasser died, from the account of someone who made it across.

On the video, a man runs by a white and blue truck and pulls himself up.

The video is overlaid with Arabic text, the Union Jack and two letters from the English alphabet: “UK.” 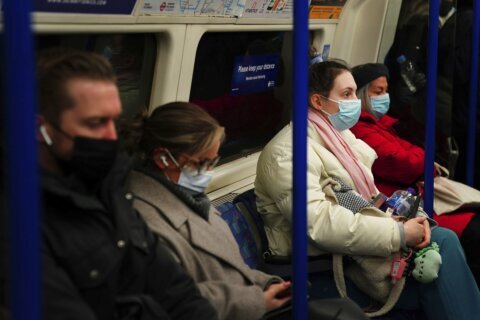