THE HAGUE, Netherlands (AP) — A key pre-trial hearing opened Tuesday at the International Criminal Court for an alleged Central African Republic rebel leader, with the court’s chief prosecutor urging judges to confirm that evidence against the suspect is strong enough to merit putting him on trial on charges of crimes against humanity and war crimes.

Mahamat Said Abdel Kani, who is accused of being a leader in the Seleka rebel group, was detained and handed to the court in January on an arrest warrant the ICC issued under seal two years earlier alleging his involvement in crimes committed in the Capital, Bangui, in 2013.

He faces 14 charges linked to the detention and mistreatment of prisoners at two detention sites in Bangui in 2013. He was not required to enter a plea at Tuesday’s hearing.

The city descended into a violent conflict in 2013 between the predominantly Muslim Seleka rebels, who ousted then-President Francois Bozizé from power, and a mainly Christian militia called the anti-Balaka. The violence left thousands dead and displaced hundreds of thousands more.

Two alleged anti-Balaka commanders, Alfred Yekatom and Patrice-Edouard Ngaïssona, already are on trial at the global court. Said is the first suspect detained from the Seleka side of the conflict.

Said, 51, is charged with crimes including torture, persecution and enforced disappearances. He appeared in court Tuesday wearing a suit and medical mask and listening to a simultaneous translation of the hearing through headphones.

The court’s new chief prosecutor, Karim Khan, told judges that the case against Said was simple.

“It is a detention case, and we say the evidence overwhelmingly shows that Mr. Said was in the room, where it happened. He encouraged it. He facilitated it, but he also took part in beatings and mistreatment,” Khan said.

He cited one victim who was tied up in one of the detention centers who said “the pain was so excruciating he asked his tormentors to put him out of his misery and kill him.”

The Seleka are accused of targeting people in Bangui perceived as supporters of the former Bozizé government in a deadly campaign.

A peace deal between the government and 14 rebel groups was signed in February 2019, but violence blamed on Bozizé and his allies threatens the agreement. 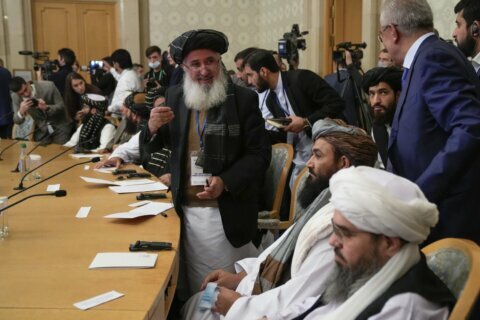