Lawmakers voted by 319 to 248 in favor of the 1.25 percentage point increase in national insurance payments made by working-age people.

The vote outcome points to only a modest rebellion among Johnson’s Conservatives — the majority of 71 was only shy of their 80-seat majority in parliament.

Still, several Conservative lawmakers voiced concerns during Wednesday’s debate that the move will dent the party’s reputation for low taxes. Others said the increase would primarily benefit elderly households in the more affluent parts of southern England at the expense of working families elsewhere.

The increase in taxes, which also applies to dividend payments and breaks a key Conservative manifesto pledge, aims to raise 36 billion pounds ($50 billion) over three years for social care and the overstretched National Health Service.

While the strains of the pandemic have left the NHS facing a backlog of millions of delayed appointments and procedures, Britain has struggled to get to grips with soaring costs for those in need of long-term care.

That burden of funding care for older, sick and disabled adults in Britain currently falls largely on individuals, who often have to deplete their savings or sell their homes to pay for it. One in seven people ends up paying more than 100,000 pounds ($138,000), according to the government, which calls the cost of care “catastrophic and often unpredictable.”

Under the government’s plan, the amount people have to pay in their lifetime for social care will be capped at 86,000 pounds starting in 2023, and everyone with assets of less than 100,000 pounds will get some state support. 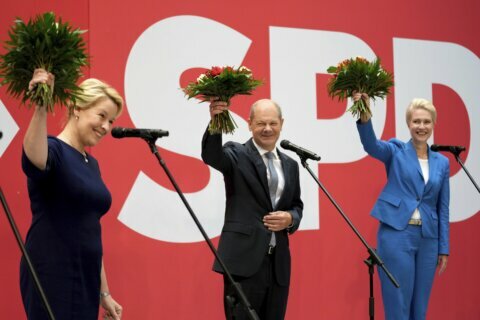