THE HAGUE, Netherlands (AP) — The future of steel production at a sprawling plant west of Amsterdam was called into question Thursday after an investigation found elevated levels of lead and other deposits in dust falling in nearby residential areas.

The investigation by the government’s Public Health and Environment Institute, known by its acronym RIVM, focused on dust found in towns and villages near the sprawling Tata Steel factory on the North Sea coast near the Dutch capital.

“Exposure to the amounts of lead and PAH in the dust in the IJmond (region) is undesirable for the health of children,” the institute said in a statement referring to polycyclic aromatic hydrocarbons, or PAH.

The study said that levels of metals including iron and chrome as well as PAH measured outdoors were between 20 and 100 times higher than outside the region, with the highest levels found at the seaside village of Wijk aan Zee.

In a written reaction, Tata Steel said it “takes the RIVM report very seriously. We understand that local residents and especially the residents of Wijk aan Zee are concerned about their health and that of their children as a result of this report and we share this concern.”

Deputy Jeroen Olthof from the North Holland provincial government said measures have to be taken urgently to reduce the emissions.

“The RIVM investigation leaves nothing to be desired in terms of clarity. It does not reassure us,” Olthof said in a statement. “Can the steel industry in the IJmond still exist? As far as I’m concerned, only if the adverse effects on health and the living environment are reduced as quickly and as much as possible.”

Residents near the Tata Steel plant have long voiced health concerns linked to dust produced by the production.

Earlier this year, the company said it would accelerate a package of measures aimed at slashing emissions from its site in the village of Ijmuiden.

At the time, Hans van den Berg, Chairman of the Board of Tata Steel Netherlands, said: “We take our neighbors’ concerns very seriously.”

For the study published Thursday, researchers from the RIVM measured dust three times in villages around Tata Steel at 29 outdoor locations and 12 indoors. They also carried out measurements outside the region as comparison.

Lawmakers in the Dutch parliament are set to hold a debate next week about the Tata Steel plant. Steel making in the village of Ijmuiden dates back to 1918. The plant was acquired in 2007 by Tata Steel, one of Europe’s biggest steel producers. 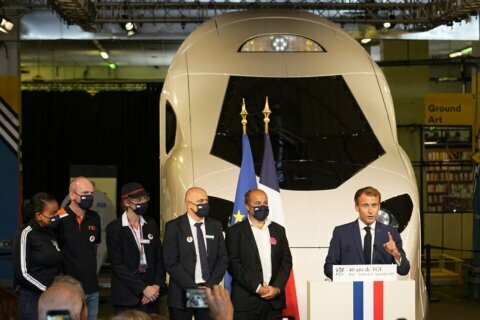