PARIS (AP) — A leading international economic watchdog urged developed countries to put more effort into providing low-income countries with coronavirus vaccines in order to ensure that the global recovery from the pandemic is more even.

In its latest assessment of the state of the global economy, the Paris-based Organization for Economic Cooperation and Development said Tuesday that the global recovery from the shock of the pandemic is faster than it anticipated a year ago. Though the global economy has more than recouped the 3.4% output lost in 2020, it cautioned that the recovery is “uneven.”

The OECD, which monitors and advises its 38 member countries, modestly downgraded its growth forecast for this year to 5.7% from 5.8% previously. For 2022, the OECD raised its forecast to 4.5% from 4.4%.

Among developed countries, the OECD said the U.S. economy is set to grow this year by 0.9 percentage points less than it anticipated in May, though at a still-healthy 6%, while the 19-country eurozone is bouncing back by a full percentage point more than previously thought at 5.3%. It left its China growth unchanged at 8.5%.

In its report, the OECD said greater international effort should be put in to provide low-income countries with the resources they need to vaccinate their populations, both for their own and global benefits.

“Ensuring the recovery is sustained and widespread requires action on a number of fronts — from effective vaccination programs across all countries to concerted public investment strategies to build for the future,” said OECD Secretary-General Mathias Cormann.

Developed countries are being urged by a number of bodies, including the World Health Organization, to share excess vaccines with poor countries who have yet to immunize their people instead of using them to provide booster shots.

Last week, for example, the British government recommended that booster shots be offered to everyone over 50, health care workers, people with underlying health conditions and those who live with people whose immune systems are compromised. Others, including the U.S., are set to follow suit in offering booster shots to certain sections of their population.

The richer nations of the world have already committed to donate hundreds of millions of jabs to poorer countries via the COVAX scheme.

The OECD also urged developed countries not to be too hasty in withdrawing the “extraordinary support” they provided their economies at the outset of the pandemic as the outlook remains uncertain and employment levels in many parts of the world have not yet recovered fully to pre-pandemic levels.

It also said current inflationary pressures in the world economy arising from the reopening of economies should start to fade from next year.

The rapid pick-up in demand this year has led to a sharp rise in key commodities such as oil and metals, as well as food. The disruption to supply chains caused by the pandemic has added to cost pressures, while shipping costs have increased sharply. 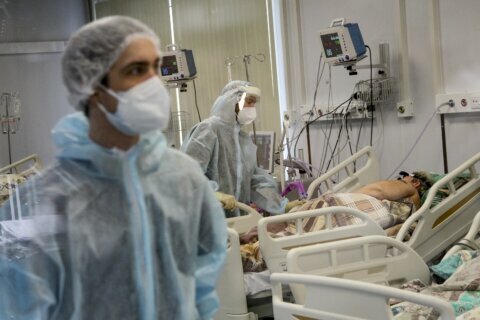