MILAN (AP) — Fashion houses trying to figure out how to reach new eyeballs after the long ordeal of the pandemic have centered around a singular idea: collaborations.

Many are doing it, in big ways and small. Gucci, which famously “hacked” Balenciaga last season, is now launching an e-commerce site showcasing refurbished vintage Gucci products and capsule collections by young designers. Hatmaker Borsalino is collaborating with the French brand Ami Paris and the equestrian-inspired brand Acheval.

If the fashion industry is going to change, now is the moment, say insiders — even if the temptation to go back to old habits is great.

Highlights from the fourth day of Milan runway shows Saturday for next spring and summer:

Michele said the project was born out of his life-long obsession with collecting fashion, including Gucci items before he ever joined the brand.

“Yes, I do this work to tell stories. But I also do it because I truly love objects,’’ he told reporters in Milan.

“Completely out of the blue, I got a message from Gucci. I thought it was an advertisement or spam,’’ Ahluwalia said. “When I realized it was real, I was extremely happy.”

Michele said the brand has a vast network of sources for vintage Gucci, which it has been tapping to rebuild its archive. The launch includes a white Jackie bag meticulously cared for by its previous owner that he wanted to keep for himself.

Then, laughing, he said, “Who knows, maybe I will log on tonight and buy it myself!”

Gucci has stepped away from the Milan Fashion Week calendar, finding its own rhythms. Its next show is Nov. 2 in Los Angeles, coinciding with the 10th LACMA Art — Film Gala, which Gucci is sponsoring.

Dolce&Gabbana wanted to shine a light back on glamour with their latest collection — and they did. Their bedazzling looks shone a spotlight that could easily be visible from orbit.

The silhouette was unapologetically sexy, built around corsets, micro-mini dresses and skimpy lingerie, fundamental elements in the brand’s creative language.

This season, designers Domenico Dolce and Stefano Gabbana went all out with light-refracting embellishments, covering garments in rhinestones, adding beading and indulging in metallic accents and fringe. Models walked down a mirrored runway under roving spotlights.

The designers said the collection was a “reinterpretation of the aesthetic of the 2000s.” They paid tribute to Jennifer Lopez with a pair of J-Lo T-shirts.

Shoes were stiletto sandals with laces, knee-high boots and mid-calf booties, which contributed a bit of a backup on the fast-tempo finale as models slowed down to descend the stairs. The boots came in satin, denim, camouflage and crocodile.

Each Dolce box handbag had a unique design.

Though in Milan for the show, the designers appeared virtually on a screen for their traditional post-show bow.

With the world ground to a near halt, Arthur Arbesser’s team primed their creative juices by recycling shipping boxes into cardboard flowers and crocheting fanciful hats.

The collection’s title “Lost and Found,” refers concretely to inspirations found in a family attic that spark happy memories, but it can also mean things lost and found in the pandemic, like the joy of making things in quiet moments.

“I realized that it is so important to do something with your hands because you get a sort of satisfaction, and we need satisfaction,’’ Arbesser said.

In the wake of the pandemic, the Milan-based Austrian designer has happily given up the runway for more personal presentations, transforming a storefront in Milan’s tony luxury shopping district into a creative studio decorated with a bespoke mural and displaying a new line of table clothes along with his latest collection.

Details from the mural became a decoration on a dress pocket. The long romantic silhouettes contrasted with crop tops. A mini-dress in black-and-white check was paired with a boxy print shirt, while a short skirt in tapestry had a youthful appeal. Prints of the season include naive drawings, colored checkerboard prints with a pixel effect, alongside gingham, retro plaids and stripes.

“The most important thing to keep going,’’ Arbesser said. “We’re happy because we think that our own well-being and that of your team and the people around you is so important.”

There’s nothing like a pandemic shutdown to rethink a business.

The 164-year-old Italian hatmaker Borsalino used the time to focus on new collaborations, extending the brand into leather goods and scarves through licensing deals, relaunching its digital presence, optimizing production and getting the kinks out of machinery that otherwise could be idled.

“It was a great break. We took decisions that weren’t easy to do before,’’ said Philippe Camperio, Haeres Equita’s principal behind Borsalino’s relaunch.

To reach new audiences and expand distribution, Borsalino has collaborated with Paris brand Ami on a simple cloche with a wavy brim, and with Acheval on a raffia capsule collection featuring ribbons with horse silhouettes. The website now includes tutorials on how to size and wear hats. And Borsalino is working with young designers at the Marangoni Fashion Institute to make hats part of their styling language.

The Spring/Summer 2022 collection launched this week is a journey through Japan, Italy and South American. Dark denim baseball caps and bucket hats are personalized with charms or Geisha prints for a Tokyo hip look. A hand-crocheted raffia hat represents Sicilian craftsmanship. And Ecuadorean influences come through on Panama hats with distinctive ribbons.

Every brand has a different response to how the pandemic has changed or challenged them.

“For us it is to embrace today’s values, to be socially responsible, which includes sustainability and the circular economy, and diversity in terms of attracting everyone,’’ said creative director Giacomo Santucci.

The Ferragamo woman for next summer is understated in an easy-to-wear silhouette with sexy moments.

For women, footwear revived the Vara and Varina ballerinas in new materials including rattan, and an open-toed sandal for him. 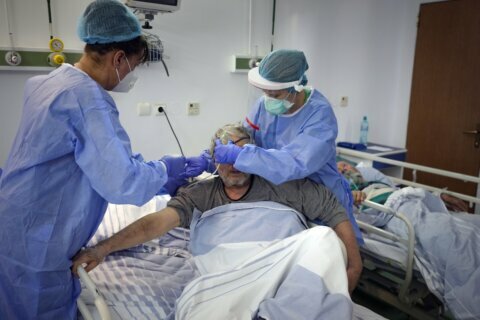