Both were acquitted in 2019 of responsibility for crimes including murder, rape and persecution following disputed elections in 2010, with judges saying prosecutors failed to prove their case. The decision halted the trial before defense lawyers had even presented their evidence.

Wednesday’s appeals panel decision by majority to reject the prosecutors’ appeal against the acquittal ends proceedings against both men.

Dozens of supporters of Gbagbo hugged and cheered outside the court building after the decision.

“Gbagbo is free!” a woman sang in French, while waving an Ivory Coast flag.

Leaving the court a free man, Ble Goude said he was happy the case was over.

“I’m acquitted person now definitely speaking. I thank all the people of Ivory Coast and Africa for their support,” he said.

He would not give a time frame for returning home, saying he first would speak with his family and lawyers.

“It depends on the government of my country, but I’ll make the request,” he said.

Gbagbo was believed to have left the court without speaking to media. It was not clear what his next step will be or when he might seek to return to Ivory Coast.

His wife, Simone Gbagbo, expressed joy at the court’s decision.

“Now that he is released, he must return home,” she said from Abidjan. “The government must charter a plane to pick him up. I am counting on the government to do so.”

Presiding Judge Chile Eboe-Osuji said the panel “rejects the prosecutors’ appeal and confirms the decision of the Trial Chamber.”

“The appeals chamber hereby revokes all remaining conditions on the release of Mr. Gbagbo and Mr. Ble Goude as a result of this judgment,” he added.

The court’s chief prosecutor, Fatou Bensouda, said on Twitter that she respected the decision.

“We will take the time necessary to review & carefully analyse the judgement & its dissenting & separate opinions in detail so that we fully appreciate its rationale & import for our work,” she wrote.

Ble Goude’s lawyer, Geert-Jan Knoops, flashed a victory sign as he was welcomed by the supporters outside court.

“These two people were really wrongly accused and I think the appeals chamber made it quite clear that the evidence was so exceptionally weak that no reasonable court could come to a conviction,” he said.

“I hope authorities in Cote d’Ivoire will accept the judgment and will let (Ble Goude) into the country. He wants to return after seven years.”

More than 3,000 people were killed after Gbagbo refused to accept defeat by his rival, current Ivory Coast President Alassane Ouattara.

Eken said the acquittal means that “the court has held no one responsible for atrocity crimes committed during this period.”

Issiaka Diaby, president of an association representing victims of the post-election crisis, called Wednesday’s decision “a real shame,” blaming the ICC prosecutor for failing to get justice for the families. He said he would meet with some of them in the coming days.

“There were 3,000 deaths and there are no culprits. It is a serious matter that this international institution of justice worked for eight years and was not able to put a name and a face to these victims,” Diaby said.

“The victims cannot be victims of the incompetence of the prosecutor’s office,” he added. “I am worried for Ivory Coast. If we remain in impunity, every citizen must consider himself in danger.”

Prosecutors appealed the 2019 ruling, saying the decision to acquit was wrong and asking appeals judges to declare a mistrial, but the appeals panel rejected all their arguments.

Gbagbo and Ble Goude were released following their acquittals but returned to court for Wednesday’s hearing.

Gbagbo was the first former president to go on trial at the global court and his case was seen as a milestone in efforts to bring to justice even the highest-ranking leaders accused of atrocities.

He refused to concede defeat after losing the 2010 election to Ouattara. Both men held inauguration ceremonies and a months-long standoff ensued until pro-Ouattara forces captured Gbagbo.

Ouattara, who has been in power for nearly a decade, was re-elected in an Oct. 31 vote for a controversial third term strongly contested by opposition leaders. He maintains that the two-term limit for presidents does not apply to him because of a constitutional referendum passed in 2016.

Gbagbo still has strong support in Ivory Coast and his followers say they have been left out the country’s reconciliation process in the years since his ouster. They supported his run for president last year, but his candidacy was not approved. 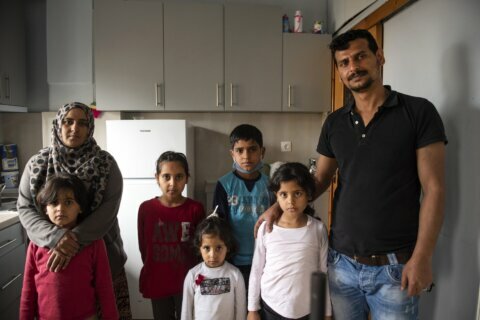 Syrian family reunited, against the odds, in Greece