China blasts US ‘evil past of genocide’ at UN rights body

GENEVA (AP) — China on Wednesday blasted the United States’ human rights record, citing what it called U.S. failures against COVID-19 that cost “hundreds of thousands of lives,” as well as racial discrimination, police brutality, and an “evil past of genocide.”

Jiang Duan, a counsellor at the Chinese mission in Geneva, voiced the criticism at the end of an examination of the U.S. rights record at the Human Rights Council, part of a regular review faced by all countries at the United Nations’ top human rights body.

The comments testified to growing outspokenness of Chinese diplomats, and the swelling rivalry between the world’s top two economic powers. The U.S. has repeatedly criticized China’s rights record on issues like the rights of protesters in Hong Kong and the detention of Muslim Uyghurs in the Xinjiang region.

In a brief but sharp statement, Jiang criticized U.S. military interventions abroad that had resulted in “tremendous deaths of civilians” and faulted U.S. forces for having “slaughtered innocent civilians and conducted torture” in other countries.

“The U.S. neither apologizes for its evil past of genocide nor provides reparation to the victims,” he said, without elaborating. “The U.S. has failed to take effective measures to control the COVID-19 pandemic, resulting in the loss of hundreds of thousands of lives.”

Jiang said the U.S. didn’t accept most of China’s recommendations during the review.

Lisa Peterson, the U.S. acting assistant secretary for democracy, human rights and labor, said the U.S. was “very proud” that it had accepted more than four-fifths of 347 recommendations put up by other countries on ways the U.S. could improve its rights record.

She outlined U.S. support for some recommendations and pointed to U.S. efforts on issues such as the rights of migrants and indigenous peoples, climate change, and improving Americans’ access to health care during the pandemic.

Peterson said “no issue is more central to the goals and policies” of the Biden administration than “addressing systematic racism —- forthrightly, honestly and powerfully — and the legacy of discrimination in our country.”

“We’re not perfect — far from it — but we are going to keep striving to live up to our highest ideals and principles,” she said, shortly before Jiang and other diplomats spoke.

The new administration has resumed U.S. participation at the Geneva-based council after a 2-1/2-year absence under former President Donald Trump. Washington is now seeking a seat on the 47-member council for a three-year term starting in 2022.

Secretary of State Antony Blinken said the completion of the review showed a U.S. “commitment to openness, transparency and self-reflection, and a return to leadership with confidence, respect and humility.” 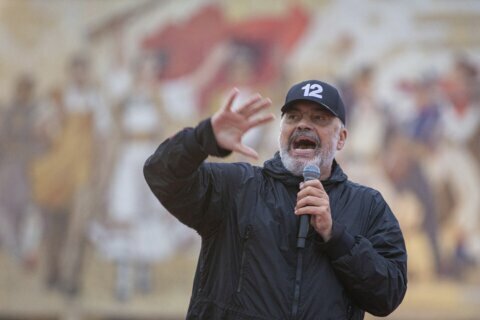