LONDON (AP) — A painting by Winston Churchill that is a piece of both political and Hollywood history is coming…
Listen now to WTOP News WTOP.com | Alexa | Google Home | WTOP App | 103.5 FM

LONDON (AP) — A painting by Winston Churchill that is a piece of both political and Hollywood history is coming up for auction.

Christie’s auction house said Monday that the Moroccan landscape “Tower of the Koutoubia Mosque” — a gift from Churchill to U.S. President Franklin D. Roosevelt — is being sold by Angelina Jolie next month with an estimated price of 1.5 million pounds to 2.5 million pounds ($2.1 million to $3.4 million).

The image of the 12th-century mosque in Marrakech at sunset, with the Atlas Mountains in the background, is the only painting that Britain’s World War II leader completed during the 1939-45 conflict.

He painted it after the January 1943 Casablanca Conference, where Churchill and Roosevelt planned the defeat of Nazi Germany. The two leaders visited Marrakech after the conference so that Churchill could show Roosevelt the city’s beauty.

“Roosevelt was blown away by it and thought it was incredible,” said Nick Orchard, head of Christie’s modern British art department. He said Churchill captured the view in the “wonderful, evocative painting” and gave it to Roosevelt as a memento of the trip.

Churchill was a keen amateur artist who completed some 500 paintings after taking up painting in his 40s. Orchard said that “the light in Morocco and over Marrakech was something that Churchill was passionate about” and painted again and again.

“He loved the dry air, the light, the sun and the way it played on the landscapes,” he said. “And that’s absolutely visible here in this painting. You can see the long shadows and the turning purple of the mountains and the deepening of the sky — classic sunset time.”

The painting was sold by Roosevelt’s son after the president’s death in 1945, and had several owners before Jolie and partner Brad Pitt bought it in 2011.

The couple separated in 2016 and have spent years enmeshed in divorce proceedings, amid speculation about the division of their extensive art collection. They were declared divorced in 2019 after their lawyers asked for a bifurcated judgment, meaning that two married people can be declared single while other issues, including finances and child custody, remain.

The painting is being sold by the Jolie Family Collection as part of Christie’s March 1 modern British art auction in London.

Orchard said the auction house was hopeful it could set a new record for a Churchill work.

“The record price at auction for Churchill is about 1.8 million (pounds) for a painting that, in my view, is not as important as this,” he said. “And I think this is probably his most important work.” 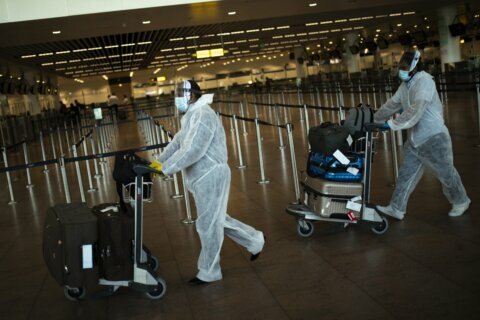 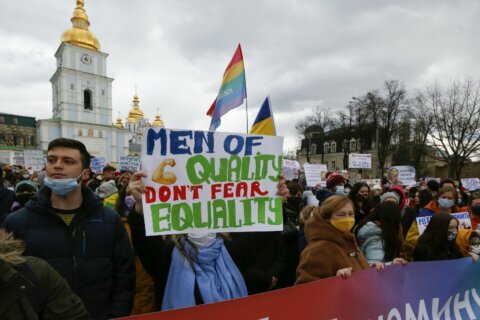