Ever the showman, Thom Browne stages a stylish extravaganza

When designer Thom Browne left New York Fashion Week four years ago to start showing his label in Paris, it left a hole in the New York calendar. No designer tells stories with his clothes in the same way, creating fashion shows that are more like elaborate theatrical productions.

Never content to simply ply his wares on a regular runway, Browne has long created complex, mystical universes, often evoking past centuries: An eerie cathedral, an 18th-century hospital operating room, a tiled swimming pool filled with bathing beauties. And his characters have often seemed to hark from another planet altogether.

Returning to New York this season — albeit only temporarily — he stayed true to this tradition, mounting a show Saturday evening that told the story of a grand old house, a magical garden and statues coming to life.

He said he wanted to focus his Spring 2022 collection — menswear and womenswear — on American craftsmanship. His collection explored classic suiting — with twists like missing pieces, asymmetrical sleeves, and various skirts for men — and also featured tulle creations for women in the trompe l’oeil style (literally, deceiving the eye.)

As guests entered a darkened theater space on the far West side of Manhattan, they milled around a huge rectangular garden in the middle of the room. Before the show began, Browne emerged to ask for a moment of silence in remembrance of 9/11.

Browne made his name creating men’s suits — distinctive shrunken suits, favored by the likes of LeBron James, or more recently skirt suits, like that worn by Levy at the Emmys. But he is also known for couture-level creations for women. His enormous quilted and feathered gown for Cardi B at the 2019 Met Gala took 10 people to merely hold her train.

There were more minimalist creations on display Saturday, in a show Browne called “an homage to American designer tailoring and sportswear.” He opened with a couple of cyclists with horse’s heads riding 19th-century-style bicycles around the room — nothing too unusual for Browne.

“In a grand beautiful house in the center of a beautiful garden,” a narrator intoned, “a couple of elderly bachelors had retreated from the outside world.” But over the years the garden had been forgotten. Until, “one beautiful moment” where it came alive.

The men came out wearing a series of gray suit elements — coats or capes, long and short, with skirts and trousers of different lengths and styles. Some jackets had one short and one long sleeve. One model wore the waist of his skirt up by his shoulders. Models had silk flowers in shades of gray affixed to their heads, and they carried capes of the same flowers.

Then came a series sleeveless shift-like garments, also in shades of gray. Then, suddenly, colors: tulle creations in hues like pink, red, purple and blue.

These were meant to be the statues as they were originally painted. “The art of trompe l’oeil,” Browne wrote in his show notes, “each sculpture created with hundreds of individually-cut tulle pieces, hand-stitched in assorted layers to mimic highlights and shadows.” 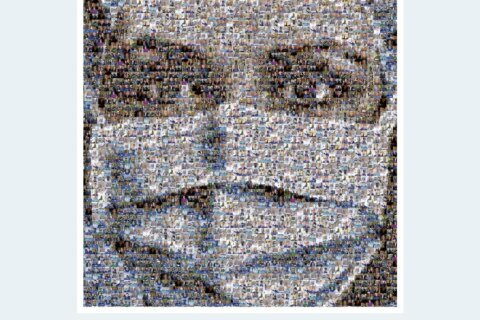 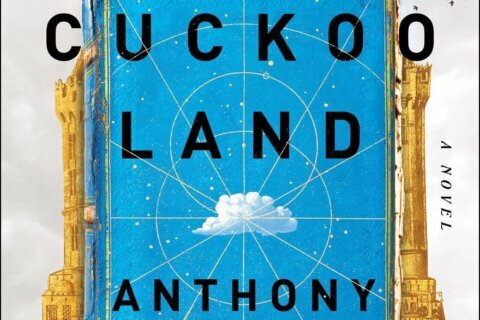