A contractor hired by Arizona's state Senate to oversee the recount of 2.1 million ballots from November's election in the county that includes the metro Phoenix area wants a judge to keep secret its methods for ensuring ballot privacy.
Listen now to WTOP News WTOP.com | Alexa | Google Home | WTOP App | 103.5 FM

PHOENIX (AP) — A contractor hired by Arizona’s state Senate to oversee the recount of 2.1 million ballots in the county that includes the metro Phoenix area wants a judge to keep secret its methods for ensuring ballot privacy.

The request came in advance of a hearing Tuesday where a judge planned to review policies and procedures for ensuring voter privacy and ballot secrecy that the Senate and contractor Cyber Ninjas are using in the Maricopa County recount of November ballots.

Florida-based Cyber Ninjas filed the policies under seal Sunday and asked Maricopa County Superior Court Judge Christopher Coury to keep them sealed as trade secrets and because the Senate is immune to legal actions as a separate branch of government. The company also wants the hearing closed to the media and the public.

The hearing was cancelled after the Cyber Ninjas filing prompted Coury to recuse himself from the case because the company added an attorney to its team who previously worked as Coury’s intern. Another judge was appointed to hear the case and set a hearing for Tuesday.

The Arizona Democratic Party and the lone Democrat on the Maricopa County Board of Supervisors sued the Senate and Cyber Ninjas last Thursday. They wanted the recount of the 2020 presidential election won by President Joe Biden halted unless they were given guarantees that voter privacy and ballot secrecy would be ensured.

Judge Coury ordered the company to follow ballot and voter secrecy laws and demanded they turn over written procedures and training manuals before the hearing on the Democrats’ request. He offered to pause the count over the weekend if Democrats posted a $1 million bond to cover added expenses, but the party declined.

In the filing, coalition attorney Dan Barr wrote that “the public, and especially the 2.1 million voters whose election ballots and personal information are in the hands of an out-of-state, openly partisan private company, deserve to know what is being filed with the court and what is happening in the courtroom.”

In its filing seeking a sealing order, attorneys for Cyber Ninjas, said making the policies public could disturb the audit.

“It is no secret that this audit is an emotional issue and there exists a subset of individuals that might utilize such materials as a roadmap to breach the audit’s security …” the filing said.

Cyber Ninjas started the weeks-long recount effort Friday, but it is doing so with little transparency and refuses to allow media or the public to watch the recount being held at the state fairgrounds in Phoenix. Only observers who have had their backgrounds checked by the company are allowed in.

The audit has already been beset by amateur mistakes that critics view as evidence the auditors are not up to the task. Hand counters began the day using blue pens, which are banned in ballot counting rooms because they can be read by ballot machines. For days leading up to the audit, a crew from a group of Phoenix television stations, azfamily, had unfettered access to the supposedly secure facility as auditors were setting up equipment and receiving ballots and counting machines.

The Florida-based consultancy has no election experience and is run by Doug Logan, who has shared unfounded conspiracy theories claiming the official 2020 presidential election results are illegitimate.

Maricopa County conducted numerous pre- and post-election reviews to check the accuracy of voting machines, including a hand count of a representative sample of ballots as required by state law.

County officials also hired two auditing firms that reported no malicious software or incorrect counting equipment and concluded that none of the computers or equipment were connected to the internet.

A series of lawsuits filed by backer of former President Donald Trump challenging Maricopa County’s election results were all thrown out as being meritless.

The Senate audit can’t overturn the results of the election, but Republicans who control the state Senate say it is needed to restore voter confidence and help them craft changes to state election laws. Senate Democrats call the audit an effort to perpetuate “The Big Lie,” which is what they call Trump’s insistence that he only lost the election because of election fraud.

Biden won Arizona last year by nearly 10,500 votes and won in Maricopa County, the state’s most populous, by just over 45,100 votes. 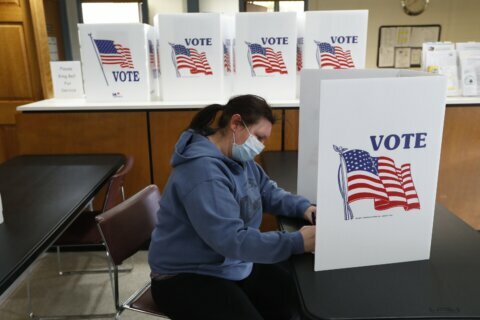