Community college-based teaching programs can dramatically cut the cost and raise the convenience of earning a teaching degree, while making a job in education accessible to a wider diversity of people.
Listen now to WTOP News WTOP.com | Alexa | Google Home | WTOP App | 103.5 FM
(1/3) 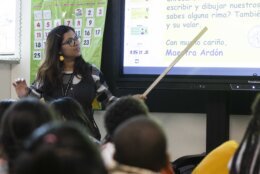 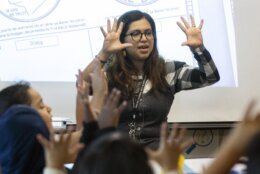 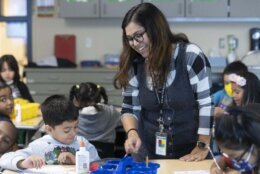 In her second-grade classroom outside Seattle, Fatima Nuñez Ardon often tells her students stories about everyday people realizing their dreams. One day, for example, she talked about Salvadoran American NASA astronaut Francisco Rubio and his journey to the International Space Station.

Another day, she told them her own life story — how she, an El Salvadoran immigrant who arrived in the U.S. in middle school speaking very little English, came to be a teacher.

Nuñez Ardon took an unusual path to the classroom: She earned her teaching degree through evening classes at a community college, while living at home and raising her four children.

Community college-based teaching programs like this are rare, but growing. They can dramatically cut the cost and raise the convenience of earning a teaching degree, while making a job in education accessible to a wider diversity of people.

In Washington state, nine community colleges offer education degrees for teaching grade school and up. All of the programs started within the last decade.

The expansion comes at a good time: Teacher shortages have worsened in the past decade, and fewer undergraduates are going into teacher training programs. The number of people completing a teacher-education program declined by almost a third between the 2008-09 and 2018-19 academic years, according to a report in March from the American Association of Colleges for Teacher Education.

And they’re attracting students like Nuñez Ardon, who became certified to run a K-8 classroom in June, at the age of 36. It’s likely she wouldn’t have pursued a classroom career otherwise.

Teacher shortages predate the pandemic. For years, the number of people graduating from teacher education programs has fallen short of demand. In 2018, 57,000 fewer students nationwide earned education degrees than in 2011.

To fill gaps in staffing, schools in Washington state have had to turn to underqualified employees. The number of waivers granted for staff who had not completed certification requirements rose to 8,080 in the 2019-2020 school year, from less than 2,800 a decade prior, according to a 2021 report from the state’s Professional Educator Standards Board.

The state in recent years has encouraged “Grow Your Own” programs, or alternative pathways to classroom certification. Some are run by schools, others by colleges. They’re seen as a way to buffer the teacher shortage and to grow a workforce more representative of the student body. Statewide, 50% of Washington students are people of color, while 87% of classroom teachers are white.

At Yakima Valley College, like other Washington community colleges, teacher candidates are assigned a residency at a partner school for the second half of the two-year program.

Students must first have an associate degree before starting the program. Classes are primarily in the evenings. While juggling their work and school load, teacher candidates are also taking a series of tests required by the state to get certified.

“By the time they finish their residency, they have fulfilled all of their requirements not only of the program but also of the state,” said Elizabeth Paulino, who runs Yakima Valley College’s teacher education program.

There has been pushback against community college degree programs in education in Washington and nationally, as universities with teacher education programs grapple with declines in enrollment, said Debra Bragg, the founder and former director of the University of Washington’s Community College Research Initiatives.

Community colleges argue that they’re a good place for teacher training because they’re open-access — there is no selective admissions process — and that they “are attracting students that the universities probably are not attracting and probably won’t attract,” she said.

Nuñez Ardon said this was the case for her.

For one thing, she was place-bound by her growing family, and the nearby University of Washington doesn’t offer a bachelor’s degree in teacher education. Cost was another factor. The program Nuñez Ardon attended at Highline College costs roughly $7,100 a year — far less than nearby universities — and allowed her to live at home and accommodated her work schedule.

Many education programs at Washington community colleges grew in response to demand from local schools.

“Their need was extraordinary,” she said.

In 2016, Centralia and Grays Harbor community colleges launched a teacher education program in collaboration, anticipating that neither would have enough students to run a full program on their own. Each planned to have an initial cohort of 12 teacher candidates. But student interest was high: There were more than 80 applicants to Centralia alone for the first cohort.

“We realized how thirsty the community was to become teachers,” Smejkal said. The next year, Centralia and Grays Harbor formed their own separate programs, and between the two schools, 175 people have completed degrees.

Smejkal said everyone from last year’s cohort who was interested in classroom teaching had signed a contract with a school before graduating.

He also said the teachers hired from the local program have so far been predominantly Latinx, and half had been bilingual Spanish-English speakers, better matching the district’s student demographic and support needs.

Meanwhile, Nuñez Ardon spends her days at Madrona Elementary School in SeaTac as a teacher and role model to young students she sees herself in — and in whom she hopes to inspire the same curiosity and passion to learn.

This story is part of Tackling Teacher Shortages, a collaboration between AL.com, The Associated Press, The Christian Science Monitor, The Dallas Morning News, The Fresno Bee in California, The Hechinger Report, The Seattle Times and The Post and Courier in Charleston, South Carolina, with support from the Solutions Journalism Network.